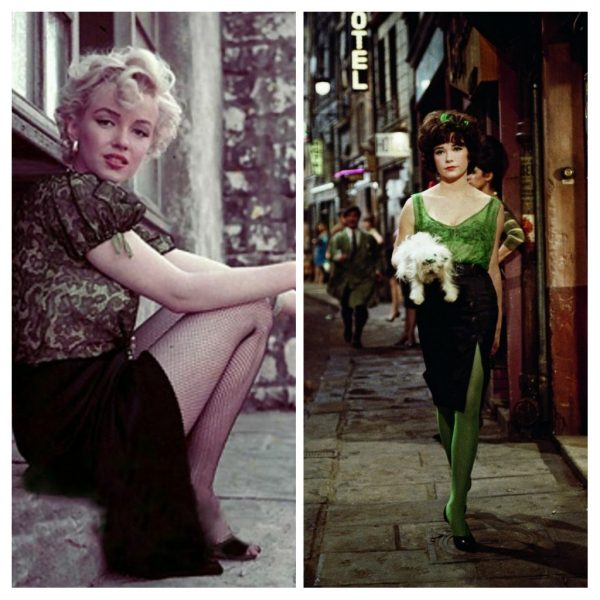 Irma La Douce, Billy Wilder’s 1963 comedy starring Shirley MacLaine as a sweet-natured Parisian hooker and Jack Lemmon as the hapless gendarme who falls for her, is being released on Blu-Ray for the first time. The lead role is said to have been rejected by Marilyn, although it’s easy to imagine her as Irma, and she had loved working with Lemmon on Some Like It Hot.

She may still have harboured a grudge against Wilder, who had spoken harshly about her in the past; but he was also considering her for his next movie, Kiss Me Stupid (which was released in 1964, starring Kim Novak.) In fact, nearly all of Wilder’s subsequent movies feature a character who could conceivably have been played by Marilyn.

Although some say Marilyn refused to play a prostitute, she had previously performed a scene from Anna Christie at the Actors Studio, and was still hoping to star as Sadie Thompson in Rain. In any case, in 1962 she was focused on working off her old contract at Fox. And by the time Irma La Douce opened, Marilyn had passed away.

Although Shirley’s persona was more kooky than sex goddess, both she and Marilyn excelled in tragi-comic roles. Some Came Running (1958) and Can-Can (1959) were offered first to Monroe, and in 1964, MacLaine would star in What A Way To Go!, which Fox had planned as Marilyn’s next picture.

This second extract from Alistair Cooke at the Movies focuses on ‘The Script That Got Away: Mr Khruschev’s Propaganda Tour at US Expense’, an article about the Soviet premier’s historic visit, published in The Guardian after Marilyn attended a Twentieth Century-Fox luncheon in Khrushchev’s honour on September 20, 1959.

“He was whizzed so fast over the boulevards between the airport and the Twentieth Century-Fox studio that not one Angelino in a thousand could have guessed, without prior knowledge, that here was the chairman of the Council of Ministers of the Union of Soviet Socialist Republics and not, say, Marilyn Monroe on her way to a dress fitting.

He was shown what any other distinguished tourist would have been allowed to see. He saw the dancing girls of Can Can. He was actually seated at the same table as Gary Cooper, Eddie Fisher, Marilyn Monroe and James Mason. The supreme accolade was reserved for his wife: she was seated next to Frank Sinatra. American hospitality can go no farther.

‘And yet, and yet …’ as the old silent movie captions used to say, the production blew up in the faces of hundreds of skilled politicos, directors and protocol experts who had written it. Nikita Khrushchev, the humble shepherd boy who grew up to play the starring role in the lurid melodrama known to the papers here as ‘The Hangman of Hungary’, retraced his spiritual ancestry and suddenly turned from the home-town boy made good into a frightening ‘baddie’.

He began, with amazing magnanimity, by greeting Spyros Skouras, the president of Twentieth Century-Fox, as ‘a friend and brother before Christ’. He ended by recalling again the futile invasion of his country by soldiers of America, France, Germany, Poland and Britain, by briefly catching himself in an apology for such a tasteless memoir, and then by swelling the veins in his neck in protest at the State Department’s denial of his wish to go down to Anaheim and make a tour of Disneyland…

The movie stars could not have been more uncomfortable if they had been sitting there in nothing but their mascara. Miss Monroe ventured that Mr Khrushchev’s speech ‘was interesting’. Winston Churchill could not have done it better.”