Michelle Williams is interviewed in February’s GQ, complete with photos by Michael Thompson which are certainly Monroe-inspired.

‘What is so impressive about Williams’s performance as Marilyn Monroe is everything that it is not. Every legendary aspect of Monroe’s that you’d expect is in there somewhere—the vulnerability, the flirtatiousness, the slapstick, the desperation, the oozing sexuality, the wounded fragility, the chronic insecurity—but rather than being overtly played, these are hidden away where they should be, inside a character who Williams manages the near impossible feat of convincing us might once have been an actual human being. The best advice she got before filming began, advice clearly taken, came after she had approached Philip Seymour Hoffman (whom she had appeared with in Synecdoche, New York) and told him, “I’ve committed to this awful thing of playing Marilyn Monroe.” “His advice,” she says, “was: ‘If there’s even a whiff of the icon, things get much less interesting.'”‘ 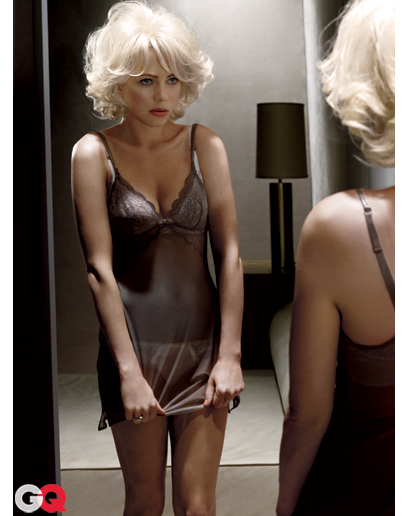 A photo from Michelle’s earlier session with Brigitte Lacombe is on the cover of German Vogue this month. I think Lacombe’s work is closer to the Marilyn of 1956, though Thompson definitely brings out Williams’ sultry side.

Film-maker Joseph Lally (The Murder of Jean Seberg) argues that the many representations of Marilyn – in film and literature – can never match the original:

“The greater reality of Monroe was her talent, otherwise she be just another sad case, or one of many starlets. The soul of Monroe is in performance: that combination of comic timing, vulnerability as well as strength, and her precise body language, a grammar yet to be duplicated.”

Underlying Lally’s point about the latest wave of Marilyn mania, The Smoking Jacket features a montage of 13 celebrities in 81 Monroe-inspired poses. (In my opinion, the most appealing work comes from models who may not resemble MM exactly , but have clearly studied her essence while retaining their own.)

TrendHunter looks at Brigitte Lacombe’s portraits of Michelle Williams as Marilyn (in my view, more succesful than the movie she starred in.)

‘“Michelle was as close as you can get to becoming Marilyn; aware of my presence, but really in Marilyn’s world,” says the photographer who has worked on films with Martin Scorsese, Spike Jonze and Quentin Tarantino. “I was there for the very last scene on the very last night of filming, in this tiny pub just outside of London,” says Lacombe. “It was very intense and taut, [the crew was] almost delirious with fatigue—it was a smokey, crowded and elated atmosphere.”’

Michelle Williams has been talking about her performance in My Week With Marilyn. She told Newsweek, “I knew all the stuff that was written in Arthur [Miller’s] journal. I knew what she read. This man was going to save her; this man was going to give her the family she never had. Her vision of the world got reinforced again. There it goes: Everyone will abandon me. That’s such a devastating point of view.”

Michelle also graces the cover of December’s Elle (UK edition, out tomorrow.) Of Marilyn’s style, she says, “Something I really appreciated about her is what a simple dresser she was. She’s really, in her personal life, completely unadorned. Everything that she wore looked like she could take her shoes off and run through a field. And I like that.”

Of the private Marilyn, Michelle explains,  “I had always been more interested in the private Marilyn, and the unguarded Marilyn. Even as a young girl, my primary concern wasn’t with this larger than life personality smiling back from the wall but with what was going on underneath.” 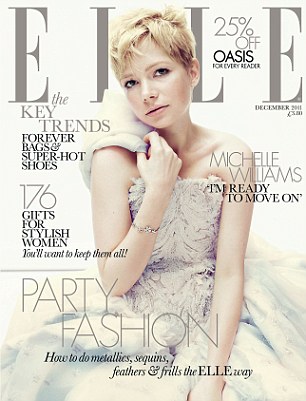