As many fans will know, Norma Jeane Baker was born in Los Angeles to an absent father and her mother suffered from mental illness. For much of her childhood she stayed with friends and family, and also spent time in an orphanage and in foster care.

As children’s services protect vulnerable families during the coronavirus crisis, Marilyn has been chosen to front a campaign for the Raise a Child non-profit organisation based in her hometown, alongside some of today’s celebrities who have also benefited from fostering.

Although Marilyn’s childhood memories were not all happy, she would later lend her name to numerous children’s charities and was reportedly considering adopting a child in the final months of her life, so this campaign is a wonderful way to honour her legacy.

“The faces of some notable former foster children — screen legend Marilyn Monroe, actress/comedian Tiffany Haddish and Olympic gold-medalist Greg Louganis — are featured prominently in a new street-banner campaign that began this week in an effort to recruit foster and adoptive parents.

The campaign by the nonprofit RaiseAChild — which will run through mid-July — is an effort to increase the number of foster and adoptive homes, particularly in Los Angeles County, which manages the nation’s largest child welfare system with 35,000 children in care, officials said.

‘We’re honored to support RaiseAChild’s mission and bring awareness to this important cause,’ said Katie Jones, vice president of entertainment at Authentic Brands Group, which owns the Marilyn Monroe estate.

Jones said many people are unaware that Monroe grew up in the foster care system and often craved the stability of loving parents and a permanent home.”

Marilyn’s smile was her fortune, and like any glamour girl, she took good care of her teeth. As we can see above, her image was once used to promote Pepsodent toothpaste, and in 1952, she was photographed with Dr. Louis Armann for a magazine spread. As reported by Yahoo Finance today, Authentic Brands Group (ABG), the licensor of Marilyn’s estate, have launched yet another merchandising deal with Oral Fitness by Dale Audrey Inc.’s WHITE2NITE brand (the whitening pen includes a limited edition Swarovski crystal cap.)

The Hard Candy makeup and skincare brand has launched a budget range in partnership with ABG, the licensor of Marilyn’s estate, with items priced at $7 or less and available at Walmart, Allure reports.

Authentic Brands Group (ABG), the licensing company who acquired Marilyn’s estate in 2012, have authorised an adaptation of Keith Badman’s book, The Final Years of Marilyn Monroe, Deadline reports. This project was first announced in 2019 (see here) as a serial drama for BBC television. It’s not stated whether the Beeb is still involved, but Final Years will be co-produced by 101 Studios and the UK’s Seven Seas Films, with a screenplay by Dan Sefton (whose credits include The Good Karma Hospital.) As usual with the film industry, it is likely to be a long process; and with a non-fiction source, it differs from the upcoming Netflix biopic based on Joyce Carol Oates’ controversial novel, Blonde (due for release later this year.) Badman’s biography is worth reading, though not without its flaws – read my review here.

As Zales Jewellery launches a Marilyn-themed diamond range in association with her estate, she is ranked 8th on Forbes‘ list of the thirteen Top-Earning Dead Celebrities of 2019, with $13 million earned in this year alone. Michael Jackson tops the poll for the seventh consecutive year, with Elvis Presley just behind, and Whitney Houston, the only other woman, in 12th place.

Marilyn Monroe: Timeless Elegance, an exhibition featuring items of her personal property from the collections of Greg Schreiner and Scott Fortner, plus photos by Lawrence Schiller, is now on display at the Blancpain boutique on Fifth Avenue in Manhattan, in association with the licensing wing of Marilyn’s estate, Authentic Brands Group (ABG) until November 23. The items on display include Marilyn’s diamond-ensconced 1930s Swiss Art Deco watch, purchased by Blancpain from Julien’s Auctions in 2016 for $225,000, and her costume from The Prince and the Showgirl, as Roberta Naas reports for Forbes.

Marilyn makes the front page of today’s Financial Times with news about ABG, the licensor for her estate.

“BlackRock has sealed its first major buyout deal, scooping up Authentic Brands, the celebrity and clothing licensing group, as the world’s largest asset manager tries to muscle in on the private equity boom. The asset manager will pay $870m for a controlling stake in New York-based Authentic Brands, which holds the brand rights to Marilyn Monroe … Authentic Brands, which is led by its founder and chief executive Jamie Salter, licenses 50 brands that together generate $9.3bn in annual retail sales, according to the company. Following the deal, BlackRock will be its largest shareholder.” 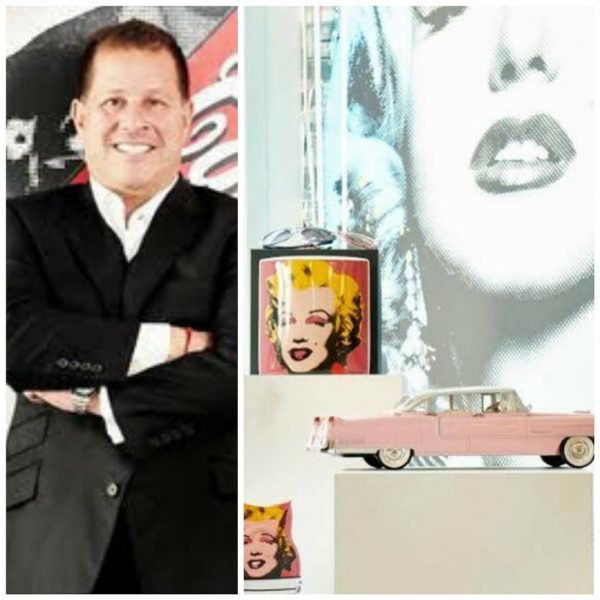 Any longtime  Marilyn fan will know the challenges we face in preserving her true legacy, and two recent news stories suggest our troubles are only beginning. Toby Walsh, a professor of Artificial Intelligence (AI), believes that by 2050 – a century after she first found fame – Marilyn will be ‘starring in movies via an avatar program that talks and acts like her, with machines having learned her speech and mannerisms from her films,’ reports The Australian.

Even more alarming is an article in The Sun about the burgeoning popularity of sex robots. ‘Marilyn comes up quite often,’ says engineer Douglas Hines, of the public requests for celebrity lookalike dolls. ‘The caveat is we need the approval of the person or family. If you wanted a robot that looked like Marilyn Monroe, you would have to have her estate approve it.’ (The idea of a ‘Marilyn Monroebot‘ was first mooted – albeit in jest – on a 2001 episode of the animated series, Futurama.)

Fortunately, Marilyn’s estate has not granted permission for a robot MM, and hopefully they never will. But how long will it take until ‘bootleg’ sex dolls hit the market? And meanwhile, CGI ‘hologram‘ Marilyns have already been seen in TV ads, with her estate planning digitalised ‘live’ shows starring Marilyn and other dead icons. They can replicate her body, but not her soul, and Monroe fans of the future will have to be ever more vigilant against degrading misrepresentations.

Authentic Brands Group (ABG), the licensing arm of Marilyn’s estate, is suing a clothing company for copyright infringement over a lingerie line, reports IP Watchdog. (This is not to be confused with Marilyn Monroe Envy, an officially approved franchise, which was launched by ABG in 2014.)

“Defendant Fashion Central is a New York City-based manufacturer and wholesaler of intimate apparel, which includes undergarments. In their undergarment packaging, tags, and other branding, defendant utilized Marilyn Monroe’s image alongside phrases that alluded to famous quotes by Ms. Monroe. The defendant does not have a license to use Marilyn Monroe’s likeness or to use the registered trademarks for marketing/branding purposes.

On August 8, 2016, plaintiff became aware of defendant’s unauthorized use of the Marilyn Monroe marks and likeness and sent a cease and desist letter. Defendant continued with their allegedly unauthorized activities, leading to the filing of the complaint that starts this legal dispute. It is worth noting, however, that the defendant did not use the name Marilyn Monroe in any of its marketing, packaging, or other branding. Any association to Marilyn Monroe is based solely on defendant’s use of her visual likeness.

The fact that the Marilyn Monroe name does not appear on any of defendant’s potentially infringing products does not mean there is not a viable trademark infringement case or theory … According to the plaintiff, the Marilyn Monroe trademarks are highly recognizable and distinctive due to her enduring fame. Therefore, both federal and state law dilution claims have also been brought against the defendant.”