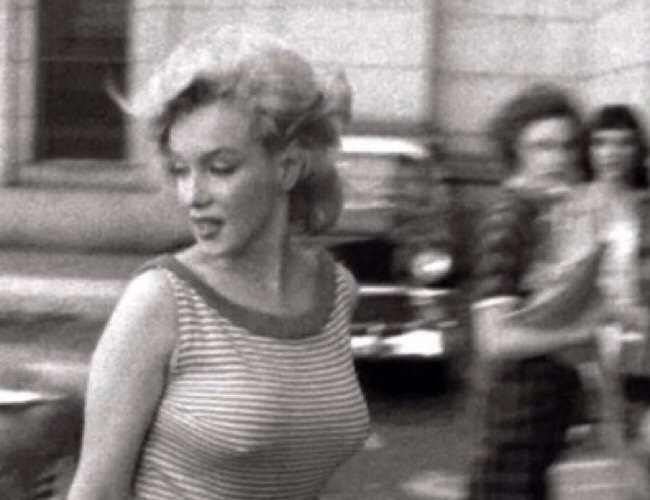 In her blog at the Jewish Daily Forward, Elisa Strauss responds to a recent New York Times piece, ‘The Marilyn Obsession’ by Austin Considine, on the current boom in nostalgia and ABG’s plans to capitalise on Marilyn’s image.

Interestingly, Strauss also shares with us a poignant anecdote about Monroe’s 1957 trip to Washington with husband Arthur Miller.

Stating that ‘sexy wins over tragedy’, Strauss suggests that Marilyn is being remembered in a superficial way, and that the lessons of her tragic life have still not been learned.

“Monroe’s allure is as powerful as it is ineffable, so much so that even I start to view her sad beginning and even sadder end as something otherworldly rather than gritty and tragic. Her fate easily becomes elevated above cause and effect, and she morphs into a saint of her own circumstances. Or, in short, an icon.

But the problem with this iconic lens on Monroe is that it conveniently blurs the very destructive pressure she felt as the preeminent sex symbol. A relative of mine hosted Monroe in Washington D.C. when she came to the city with then-husband Arthur Miller during his House Unamerican Activities Committee hearing.

Monroe spent a few weeks sleeping on a blue velvet couch in their study, and, as described by my relative, was incredibly insecure about nearly everything. She dreaded leaving the house unless physically immaculate, and she once decided to stay home at the last minute when she realized that there was a hairline chip in her nail polish. In intellectual matters, Monroe deferred to Miller on everything. My relative said Monroe spent the majority of her time reading, mostly self-help books.

Considering all the gains women have made politically, economically and socially since her heyday, this Monroe revival seems anachronistic. Monroe was the ultimate creation of male fantasy, the archetype of the blond bombshell – all bosom, golden curls and kittenish purrs – a fantasy women have since worked hard to deconstruct and redefine. And while the boundaries of what is considered attractive in Hollywood are still fairly narrow, they have still been expanded enough to include a far more diverse bunch than ever before.

Well, I’d like to ask the PR maven what he thinks about glamorizing and marketing the ‘Monroe style’ that she herself found quite destructive. Am I the only one who, when swiping a Marilyn gloss across my lips or stepping into some Marilyn high heels, would think about the ways in which the use of such objects was ultimately an oppressive act for her? That remaining desirable was not effortless for her, but rather all-consuming to the point of obsession?”

While I support Strauss’s feminist perspective, I would also argue that our focus on glamour is not entirely misguided. Marilyn’s unashamed pride in her own sexuality has inspired many women.

Though it may seem that Marilyn fever is everywhere now, in truth it never really went away. Monroe has fascinated us for over sixty years now and probably will for decades, even centuries to come.

Her beauty, intelligence, and yes, her tragedy are all part of the legend and we cannot, and should not, ever try to separate them. Like any woman, Marilyn deserves to be appreciated for all that she was.