With many of us now in quarantine due to the spread of coronavirus, I probably won’t be reporting on many events here for a while. However, we at least have the chance to watch movies at home, and with her great comedic gifts, Marilyn can brighten our days in these difficult times. On the Vulture website today, Angelica Jade Bastien recommends Some Like It Hot and if you don’t have a copy at home, it’s widely available on streaming sites like Netflix and Amazon. (Angelica has often championed Marilyn in her articles, which you can read here.)

“But to be completely honest, I return to this film for the wounded performance of Marilyn Monroe. You probably formed an idea of Monroe long before you ever saw her onscreen. Perhaps you caught sight of her flattened image — red lipped and yearning — plastered on a mug, Andy Warhol–style. Maybe you learned through osmosis to regard her as a tragedy. Monroe is a cinematic atom bomb mushrooming with significance. In death she’s become for many artists and writers an emblem of 1950s sexuality, a feminist icon, a victim, a muse. Personally, I’d rather focus on what she did onscreen, where she’s decadently hilarious, brimming with fully realized emotion. At first blush, Sugar could be discarded as just another example of the dumb-blonde archetype. Hell, she calls herself dumb. But I think she’s too self-aware for that. Monroe balances the needs of the character beautifully. Watch as her face melts like ice cream when she notes how she always “gets the fuzzy end of the lollipop.” Watch how she leans over Joe late in the film, her body a canvas upon which the film displays its notions of sex and desire. This is a movie about desire above all else, and the hilarious ways we strive for it.” 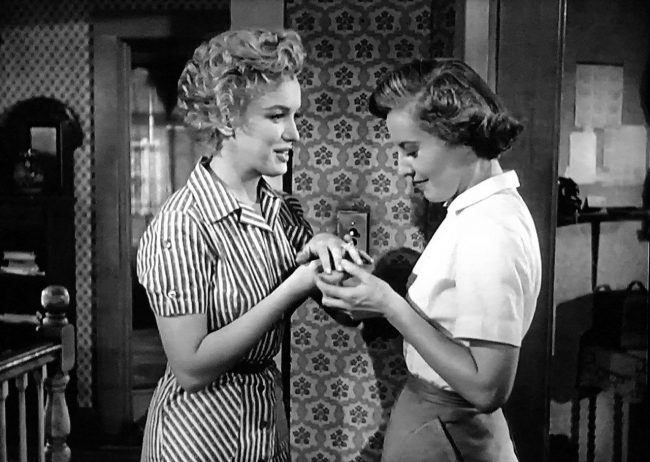 Over at Vulture, film critic Angelica Jade Bastien names  Fritz Lang’s Clash By Night (1952) in a list of ’10 Female-Led Noirs’. Some might argue that Clash isn’t a classic noir, as it’s not set in a major city and no serious crimes are committed – but for me, its gritty treatment of post-war discontent, and repressed sexuality and simmering violence place it firmly in the canon. (I would argue that Don’t Bother to Knock and Niagara also partially qualify, thanks to Marilyn’s gripping scenes with Anne Bancroft and Jean Peters, respectively.)

“What happens when the woman people view you as isn’t who you really are, nor who you want to be? Clash by Night poses this question by beginning where most noir ends. Mae Doyle (Stanwyck) has grown accustomed to a decadent life, but is forced to return to her hometown of Monterey, California, after that life falls apart. Soon, Mae settles into a life in which she’s uncomfortable, navigating marrying a gruff fisherman (Paul Douglas) and having a daughter quickly after. She finds herself drawn to the far more exciting, equally restless Earl (noir stalwart Robert Ryan). Clash by Night is a domestic noir bolstered by its rich insight into the ways women feel confined by society, as well as by its amazing direction by the legendary Fritz Lang and its performances, including a magnetic supporting turn by Marilyn Monroe. But it’s Stanwyck’s performance as a woman of temerity who is far too bold and yearning for the prosaic existence she finds herself trapped within that earns it a spot on this list.”

Students at Stanford University, California have a chance to see The Misfits today in Room 115 of the McMurtry Building at 5:30 pm. It’s being screened as part of the syllabus of Professor Usha Iyer’s course ‘The Body in Film and Other Media.’ Carlos Valladares has reviewed The Misfits for Stanford Daily…

“The cult over only the indexical sign of Marilyn Monroe (the blonde hair, the sexpot husk, the eyes) gets nowhere near her weirdnesses and complexities as a person. Of course, can we ever know? Her performances in her best work — Don’t Bother To Knock (1952), Gentlemen Prefer Blondes (1953), Some Like it Hot (1959), Let’s Make Love (1960), and especially The Misfits — give us an actual glimpse into one of America’s most obsessed-over stars.

The Misfits, which was scripted by Monroe’s soon-to-be-ex-husband Arthur Miller (yes, that Arthur Miller), punctures the popular perception of Monroe as an unreal sex goddess to be whistled at. As the critic Angelica Jade Bastien writes, “For me, Monroe is evocative more of a mood and a time than just the dumb blonde sexpot she’s become known for. Through this lens, her startling, heartfelt, gorgeous work in The Misfits feels strangely like an elegy for the dumb blonde she never truly was, and the Hollywood she existed within … she explores and brings to life the cloying weight of loneliness the way few actors can.’ Monroe delivers a frighteningly frank performance, as does everyone else in this tired film about tired failures.” 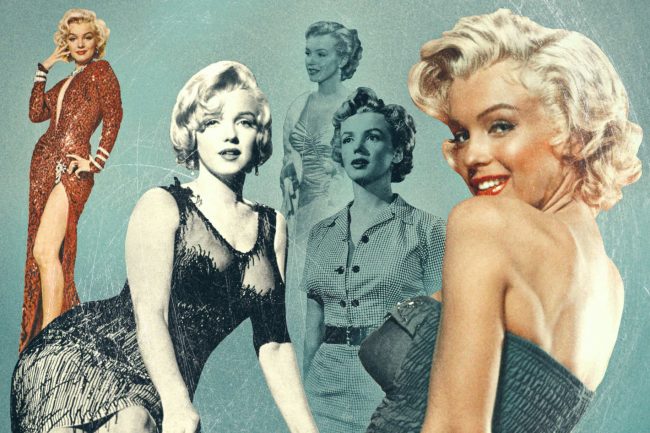 Marilyn made 29 films during her 15-year career (excluding the unfinished Something’s Got to Give.) Around half of these were made while she was still a starlet, and her screen-time is often quite limited although she always made the most of her role. In the first of an New York Magazine series profiling classic Hollywood stars, Angelica Jade Bastien has taken on the daunting task of ranking all 29 films from worst to best, with insightful commentary on each one. I don’t agree with all her opinions – for example, I would put The Seven Year Itch (ranked 10th) in my top 5. There’s also a question of whether to judge each movie as a whole, or by Marilyn’s performance – for example , her debut film, Scudda Hoo! Scudda Hay! (ranked 24th) is enjoyable fluff, but Marilyn’s role was cut to ribbons. Whereas her next ‘bit part’, in Dangerous Years (ranked just below at 25th) was more engaging. Let’s Make Love (ranked 22nd) and There’s No Business Like Show Business (ranked 15th) are among my least favourite of Marilyn’s major films, but her musical numbers are superb. However, we all have our own preferences and it’s always great to see Marilyn’s true legacy in the spotlight, where it belongs.

“Hollywood has been creating a mythology around blonde bombshells since its beginnings. But no blonde sex symbol has had a deeper and more long-lasting impact on film and American culture than Marilyn Monroe. You probably had an image of Monroe in your mind long before you ever saw her on film. The dumb blonde. The white-hot sex symbol. The foolish girl-woman. The picture of mid-century femininity — wasp-waisted, platinum blonde, and buxom. The tragic victim. These warring images have lasted long after Monroe’s death in 1962 at 36 years old, and they’re easy to twist into caricature. She’s been flattened onto dorm-room posters, mugs, T-shirts, artist renderings. She’s been linked to falsely attributed quotes, conspiracy theories, and lurid rumors. But Monroe was more complex than her legacy suggests, as both an actress and a woman. This ranking of Monroe’s 29 films — based on her performance in each — gives a sense of what a supremely talented comedian and dramatic actress she was, with a keen understanding of the camera that few actors can replicate.”