After a decade in development, the Netflix adaptation of Joyce Carol Oates’ controversial novel, Blonde – now in post-production – has hit another roadblock following the coronavirus crisis, The Playlist reports.

“Another film that was expected to be released this year is Andrew Dominik’s Netflix film Blonde. Dominik gave us one of the best films of the 2000s with The Assassination of Jesse James by the Coward Robert Ford, but then followed that up with the disappointing Killing Them Softly, so a lot was riding on Blonde which follows a fictionalized version of the inner life of Marilyn Monroe (played by Ana de Armas.) The film also stars Adrien Brody and Bobby Cannavale as Arthur Miller and Joe DiMaggio, respectively. According to IndieWire, Blonde is now intended for 2021, though it is unclear whether they’d still try to have the film play in festivals before a theatrical release.”

With roles in Knives Out, No Time to Die and the upcoming Blonde, Ana de Armas could be the breakout star of 2020. In a cover story for Vanity Fair, Ana talks about the challenge of playing Marilyn.

“Like all actors, fresh and seasoned alike, de Armas has nothing but diplomatic adjectives for her projects and costars, but she absolutely beams when she talks about Blonde, adapted from Joyce Carol Oates’s Pulitzer-nominated fictionalization of Norma Jeane Baker and directed by Andrew Dominik.

Before the script came her way, her knowledge of Monroe was limited to a few iconic roles and photos, but now she’s become a human conveyor belt of fun facts. Even her dog, Elvis, plays Monroe’s dog in the film. (‘His name was Mafia. Sinatra gave him to her. Of course.’) She also identifies with Monroe in a more profound way: ‘You see that famous photo of her and she is smiling in the moment, but that’s just a slice of what she was really going through at the time.’

‘I have never worked more closely with a director than I worked with Andrew. Yes, I have had collaborative relationships, but to get phone calls at midnight because he has an idea and he can’t sleep and all of a sudden you can’t sleep for the same reason…’

‘I remember when she showed me a video of her screen tests for Blonde,’ says Jamie Lee Curtis, whose father starred with Monroe in Some Like It Hot. ‘I dropped to the floor. I couldn’t believe it. Ana was completely gone. She was Marilyn.'”

Filmmaker Andrew Dominik’s long-awaited adaptation of Blonde, Joyce Carol Oates’ controversial novel, has hit another roadblock, Jordan Raup reports for The Film Stage. In August 2016, Dominik announced that he would produce Blonde for Netflix – but later  admitted it was ‘not a done deal.’ Although high-profile actresses like Naomi Watts and Jessica Chastain were previously mooted to play MM, Dominik still hasn’t settled on a leading lady, and he will soon  direct Tom Hardy in War Party, also for Netflix.

While Blonde was a hit among the literati, some fans found Oates’ casual disregard for the facts of Marilyn’s life hard to swallow. And a 2002 TV mini-series also received mixed reviews.

After several years of planning, acclaimed filmmaker Andrew Dominik will direct his adaptation of Blonde, Joyce Carol Oates’ controversial novel about Marilyn, for Netflix in 2017, as Jordan Raup reports for The Film Stage.

“Dominik confirms rumors that Netflix is backing the film, with New Regency Pictures and Plan B previously on board. While Jessica Chastain was previously set to star, and Naomi Watts before her, Dominik says neither are attached anymore and that he’ll cast a new actress, to be announced this January.

Based on the Joyce Carol Oates novel, he told us, ‘Blonde‘s interesting because it has very little dialogue in it. My previous three movies have relied on a lot of talking and I don’t think there’s a scene in Blonde that’s longer than two pages. I’m really excited about doing a movie that’s an avalanche of images and events. It’s just a different way. It’s a different thing for me to do. And the main character is female. My films are fairly bereft of woman and now I’m imagining what it’s like to be one.’

He adds, ‘My idea with the film is to make something a little more accessible than what I’ve done before. It moves a bit faster.'”

UPDATE: Immortal Marilyn has blogged about Blonde, outlying the potential problems of a fictional ‘biopic’.

Director Andrew Dominik is still planning to film Joyce Carol Oates’ novel, Blonde – to be produced by Brad Pitt’s Plan B company – but with a new leading lady. The Wrap reports today that insider sources are suggesting Naomi Watts is out of the picture, with Jessica Chastain now in the running. According to a thread on the IMDB message board, Dominik revealed his new favourite in February.

“Dominik adapted Blonde on spec and his agency, CAA, will represent the film’s domestic distribution rights.

Worldview Entertainment optioned the long-gestating project in May 2013, and will produce the film with Brad Pitt and Dede Gardner’s company Plan B — which according to the LA Times, boarded the project in June 2012.”

At first glance, Chastain is not an obvious choice to play Marilyn. However, her performance in The Help as Celia Foote, a character whom some have speculated may be based on MM, earned her an Oscar nomination.

My own misgivings about this project do not concern the actress or the director, who are both very accomplished, but the source material. While Joyce Carol Oates is one of America’s most prominent writers, Blonde is less of a biographical novel than a brand of speculative fiction. It was previously adapted for television in 2002, to mixed reviews.

The big-screen adaptation of Joyce Carol Oates‘s Blonde, which director Andrew Dominik has been talking up for a while now, has been optioned by Worldview Entertainment at this year’s Cannes Film Festival, reports Deadline.

Andrew Dominik (Killing Them Softly) confirmed his plans to direct Naomi Watts in a long-rumoured, big-screen adaptation of Joyce Carol Oates’ novel, Blonde, in a recent interview with The Playlist. (It will be produced by Brad Pitt’s Plan B company.)

While I’m impressed by the talent involved, I still wish Oates’ story was more faithful to historical fact. Like many fans I’ve spoken to, I’m concerned that this movie – however well-intended – may only add to the misunderstandings about Marilyn’s life.

“‘I’m going to do this movie called Blonde,’ which is about Marilyn Monroe,’ Dominik said.

As to the scope of Blonde, don’t expect a Lincoln-like sliver of the troubled star’s life. ‘It’s about her whole life,’ Dominik said, definitively. ‘It starts when she’s seven and it ends when she dies.’ Dominik acknowledged that it will be based on the Pulitzer Prize and National Book Award nominated novel by Joyce Carol Oates, then clarified his approach to the material. ‘It’s sort of a Polanski descent-into-madness-type movie,’ Dominik explained. ‘It’s about this orphan girl who gets lost in the woods.’

Those comments echo his earlier description of the movie as an ’emotional nightmare fairy tale,’ and Dominik sounds genuinely excited about the project. ‘I love it,’ he said. ‘It’s my dream project and I’ve been working on it for years and years and years.’

When we asked Dominik if he was going to push, visually, into the realm of what-is-reality-what-is-fantasy, Dominik said yes. ‘It’s very pseudo-Freudian,’ he said. ‘The lines between fantasy and reality become very blurred in the story.’ About when the film will actually shoot, Dominik optimistically says, ‘I’d like to do it next year.’ He says he hasn’t hired a cinematographer yet, but that Naomi Watts — who was attached early on, but over the summer seemed like she might have to bow out — is still on board, although, as he said, ‘Anything can happen.’

We wondered though, if he has another project ready to go, should Blonde face another delay). Dominik says no. ‘It’s pretty much all about Marilyn at the moment,’ he said.”

Collider reports that Brad Pitt’s Plan B company will produce Andrew Dominik’s forthcoming film of Blonde, based on the novel by Joyce Carol Oates about Marilyn’s life. Filming will probably begin early next year. But it is unclear whether Naomi Watts – who is about to play Princess Diana in another movie – is still attached to the project. 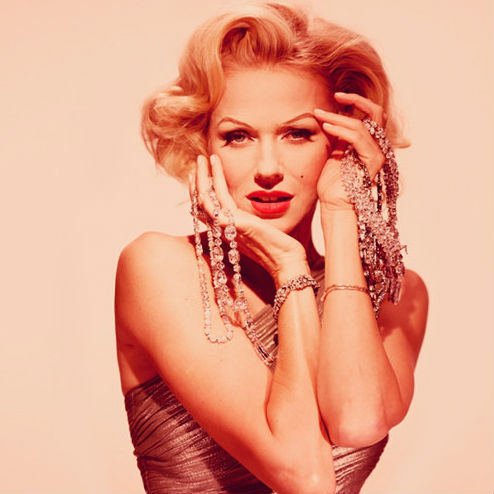