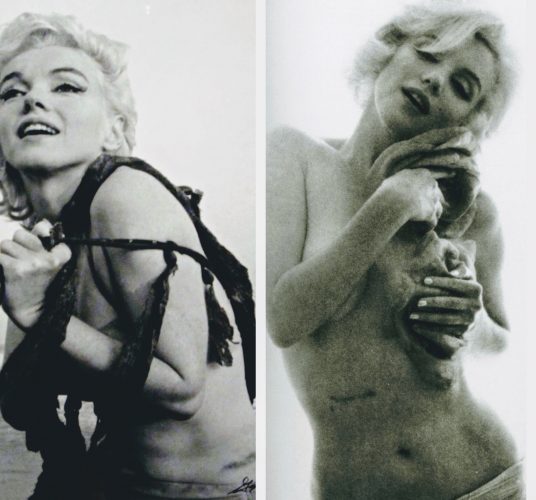 Surgical scars can be seen on Marilyn’s tummy in two of her final photo shoots, with George Barris (left) and Bert Stern (right), and in her ‘nude’ swim scene for the unfinished Something’s Got to Give, as Mehera Bonner reports for Marie-Claire. Marilyn underwent an appendectomy in 1952, and had her gallbladder removed in 1961, a year before she died. She also underwent several operations to alleviate her endometriosis and help her to have children, sadly without success. While surgical procedures are considerably more sophisticated today, our expectations have also increased. While there’s something rather liberating about these gorgeous, unaltered shots, it’s also important to remember that Marilyn – who exerted rigid control over her photo shoots, if not her movies – may herself have wanted to airbrush these photos had she lived long enough to fully review them. In fact, she vetoed many of Stern’s images, marking the rejects with an orange ‘X’; but after her death, he published the session in its entirety.

“Though she was famous for her perceived ‘perfection’ and ‘flawlessness’ (all the eye-rolls at the inherent sexism that goes into these terms), Marilyn Monroe had a pretty big scar across her stomach—which appears in both the Last Sitting and in Something’s Got to Give.

The scar itself is the result of gallbladder surgery that occurred before Stern’s famous images were taken. He says Marilyn was self-conscious about it, and called upon her hairdresser George [Masters] for reassurance before shooting. When Stern noticed the scar, he reportedly remembered Diana Vreeland saying to him, ‘I think there’s nothing duller than a smooth, perfect-skinned woman. A woman is beautiful by her scars.’

Diana Vreeland is right: women *are* beautiful with scars. But she’s also incorrect about women without them being dull. Either way, the sometimes-removal of Marilyn’s scar offers a fascinating insight into beauty standards in Old Hollywood—did she ever truly have agency as to how her body was portrayed?

Ironically, Something’s Got to Give was the first time Monroe was ‘allowed’ to expose her belly button on film—as most of her previous swimwear moments were high-waisted. Before her death, she’s said to have quipped ‘I guess the censors are willing to recognize that everybody has a navel.’

Guess what? Everyone has scars too—even Marilyn.”

“You know what? I want to look as good as the pictures I see in magazines, but it’s not going to happen. This is how it has always been, and this is how it will always be. We are all smart enough human beings to know that the images we see in magazines or on album covers aren’t real. The fact is that we don’t want to see imperfections, we don’t want to see reality. If I watch a Marilyn Monroe movie I want to see her looking stunning, and in those days it was probably worse than it is now because they actually retouched the negatives so that no bad pictures could ever be seen. I grew up admiring those idealised images, and those women were Barbie dolls compared to what we are looking at today…’