The Seven Year Itch will be screened at 10:30 am on Tuesday, July 30, at the Capri Theatre in Adelaide, Australia. 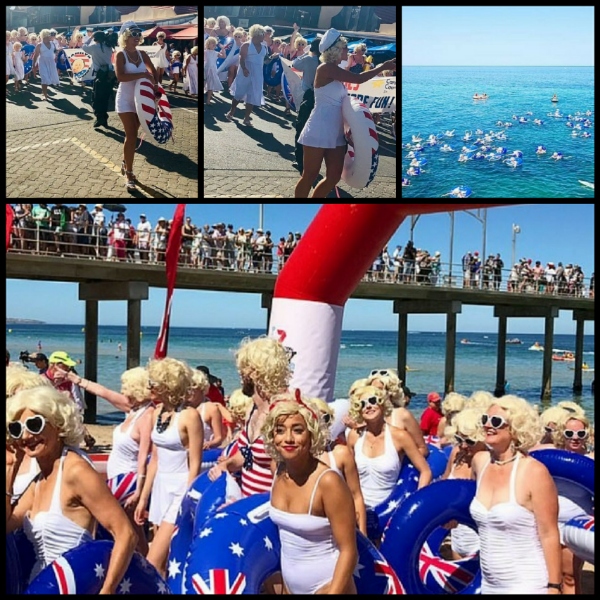 Blonde wigs were sold out across the state as the annual Marilyn Jetty Swim was held at Brighton Beach in Adelaide, Australia this weekend, as Lauren Ferri reports for the Daily Mail, with men participating for the first time among  270 swimmers breaking the Guinness World Record for most MM impersonators gathered in one place, raising $65,000 so far for cancer research (it’s expected to reach $100,000.) 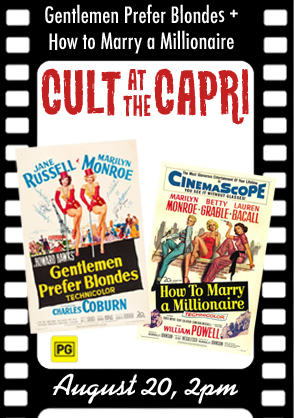 More news from Australia: a group of Marilyn lookalikes have swum around the Brighton jetty, near Adelaide, raising over $50,000 for Cancer Council SA, reports ABC News. (The event was initially planned as a mass ukulele strum.)

“The event, now in its third year, a little less than The Seven Year Itch, attracted 107 participants, and is part of the larger Brighton Jetty Classic ocean swimming events.

‘It was easy, much easier than last year, the conditions weren’t so favourable but that’s a great metaphor for life,’ Ms Tinney said.

A lot of preparation goes into playing the part of the Hollywood icon, who was born Norma Jeane Mortensen in 1926.

‘Over the years I think we have perfected it. But the basic plan is women come with their foundation on,’ she said.

‘They do their own blush and we do the vintage flicks on the eyes … and we also do the beauty spots you cannot forget or you are not a Marilyn … and we have a lipstick bar.’

Ms Tinney said her mother died after an eight-month battle with cancer in 2007 and she made a promise to raise money to find a cure.

‘My husband actually used to call my mother Marilyn and my dad John Wayne because he’s Australian and they were sort of the only American icons he knew … so I thought that was pretty weird and I saw it as a sign ...'”

A group of ukulele-playing Marilyn lookalikes from Adelaide, Australia will attempt to break the record for the World’s Largest Ukulele Ensemble in January 2016, reports Adelaide Now.

“The nimble fingered ensemble will be led by Mayor David O’Loughlin and the Marilyn Jetty Swim group, a group of Marilyn Monroe impersonators who raise money for Cancer Council SA.

‘I’ve had two ukulele lessons now,’ said Sarah Tinney (aka Marilyn), 36, from Brighton. ‘None of us have ever played the ukulele before but we’re all making great improvements every week so I’m very confident we’ll be able to accomplish it in time.'”

Beginners are welcome to sign up to learn the song ‘Daisy Bell (a Bicycle Built for Two)’ which will be played on the day.” 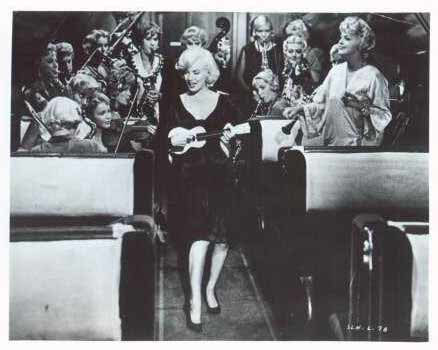 Of course, Sugar Kane – Marilyn’s character in Some Like it Hot – played the ukulele as well as singing in an all-girl band, Sweet Sue’s Society Syncopators. Maybe the Marilyn Jetty Swim Group will copy her 1920s style for the event?

(And if you’re wondering what happened to Marilyn’s ukulele, according to The Guardian it is currently on display at the Santa Barbara Surfing Museum in California.)

Cafe Etc is on Jetty Road, Brighton, a suburb of Adelaide, South Australia. Owned by Carol Walker, the cafe is decorated with MM posters and memorabilia. If you’re in the area, please do pay the cafe a visit and leave a comment here.