Rhode Island will be showing its love for Marilyn next month, with an old Hollywood-themed fundraising event at Christie’s Restaurant on February 9th, and two screenings of Love, Marilyn on the 14th (St Valentine’s Day) at Newport’s Jane Pickens theatre. Both screenings will be introduced by Adam Braver, author of the excellent Marilyn-inspired novel, Misfit.

“Braver wisely avoids gimmickry as he posits the uneasy coexistence of Norma Jeane and Marilyn within the same person. He explores that coexistence by imagining how Norma Jeane/Marilyn had to live with it. Imagining a therapy session, Braver gives us the patient’s wry point of view. ‘(I)t does make you want to smile every time she talks about Marilyn and Marilyn’s past,’ he writes. ‘Maybe it’s because Marilyn’s past is not more than a few years old? … Or that that past is a work-in-progress being created on a singular basis in this very office?’

Braver’s Marilyn believes, or wants to believe, that she can permanently erase Norma Jeane by replacing her not only with an invented Marilyn Monroe of the present, but, significantly, with a Monroe of the past as well. If you could invent a character the public sees on the movie screen and believes to be real, why couldn’t you make people believe that person has always existed? Why couldn’t you make yourself believe it?

Despite her omnipresent mythology, and the actual events and people in her life, we very quickly find ourselves letting go of the real woman as we suspend disbelief in Braver’s character. It’s a sleight of a writer’s hand in the most astutely executed way. And like any great magic trick, we never precisely know how it’s done.

To some extent, it’s about the details, obviously the result of painstaking research, but crafted as only a great fiction writer can pull them off through a seamless application of imagination to fact.”

Misfit is a new novel about Marilyn by Adam Braver. Readers of Elle shared their thoughts:

“I enjoyed the journal-entry format and learning more about the life and loves of this American icon. Braver takes the time to delve into the woman that Monroe wanted to be seen as—a serious actress separate from her often tumultuous relationships and her family’s history of mental illness. Monroe is characterized as a woman struggling with inner demons and pushing the limits of acceptable behavior, all the while moving in and out of the spotlight.—Mary Pat Rooney, Chicago

Misfit focuses too much on Monroe’s internal struggles for my taste. The author spends a lot of time in her head, and while this gives the book a dreamy quality that’s part of its charm, it also blunts the impact of any narrative thread.—Betsy Denson, Houston“ 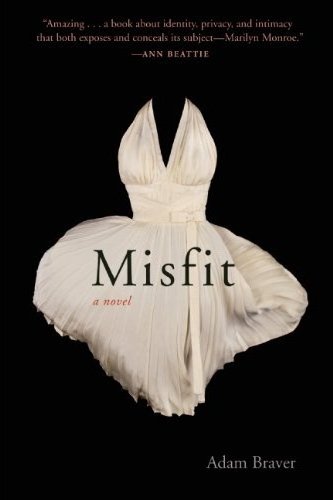 Misfit is a novel about Marilyn’s final days by author Adam Braver, whose previous book, 22 Nov, 1963 – based on the assassination of President Kennedy – was critically acclaimed. He has also written novels about Sarah Bernhardt and Abraham Lincoln. Misfit: A Novel will be published by Tin House Books in August, and is available to pre-order now from The Book Depository.

“Melding facts with imagination, Misfit is centered around the last weekend of Marilyn Monroe’s life, which, wanting to get away from the stress of a lawsuit filed against her by Twentieth Century Fox, she spent at Frank Sinatra’s resort, the Cal Neva Lodge, in Lake Tahoe. Using this weekend as a springboard, the novel explores moments throughout Monroe’s career when, faced with various opportunities, she altered her persona—from her days as a child, to her marriages with Joe DiMaggio and Arthur Miller, to her studies with Lee Strasberg at the Actors Studio, and, finally, to her role in the film Miller wrote for her, The Misfits.”

UPDATE: Here’s my review on Goodreads

“Many novelists have tried to depict Marilyn Monroe in their fiction, often with poor results. Adam Braver, however, avoids the exploitative route and instead creates a sensitive inner life for his heroine. It is set a week before her death at Frank Sinatra’s Cal-Neva lodge, with flashbacks to her early life, marriages and movies. Braver uses a variety of perspectives but the central focus is on Marilyn. Sometimes it is almost so cerebral as to be almost obtuse, but when he gets it right, Braver portrays Monroe with humanity and flair.”