As another awards season ends, All About Eve comes third in Vulture‘s ranking of the all-time best Oscar-winning movies – right behind Casablanca and The Godfather.

“Filmmaker Joseph L. Mankiewicz once described his movies as ‘a continuing comment on the manners and mores of contemporary society in general and the male-female relationship in particular.’ Which meant they were also darkly, piercingly funny. Inspired by a Mary Orr story, which had been based on an anecdote relayed to Orr about a particularly ambitious aspiring actress, All About Eve is a wellspring of razor-sharp dialogue and despicable human behavior, telling the story of Eve Harrington (Anne Baxter), a massive fan of Broadway giant Margo Channing (Bette Davis) who, slowly but surely, usurps her stardom. A takedown of ego, theater, actors, writers, vanity, and other deadly sins, All About Eve puts the dagger in with such elegance — and then does it again and again.”

While there were no direct nods to Marilyn at this year’s ceremony, British actress Florence Pugh – nominated as Best Supporting Actress for her role as flighty Amy in Little Women – wore a Louis Vuitton gown to Vanity Fair‘s Oscar party which brought to mind a 21st century version of Marilyn’s gold lamé gown, designed by Travilla for Gentlemen Prefer Blondes.

On the streets in Hollywood, meanwhile, W magazine profiled some of the faces in the crowd…

What’s your name? Monika Ekiert.
What brings you to the Oscars tonight? I’m an actress and I just finished a film about Marilyn Monroe, because before, I was in a play, The Seven Year Itch.
Are you looking to see any celebrities on the red carpet? I am not looking, I’m an actress. I was famous in Europe, so when I came here it was different, it’s not the same system. Maybe someday soon I can be like them, at the Oscars.

Back in 2018, Camila Cabello referenced ‘Diamonds Are a Girl’s Best Friend’ while performing her hit song, ‘Havana’, at the iHeart Radio Awards (see here.) Now in the video for her latest single, ‘My Oh My’, Camila plays a vintage movie star who ditches her studio bosses (and her Monroesque blonde bombshell image) to party with bad boy rapper DeBaby.

In what is becoming a fine Aussie tradition, 270 Monroe lookalikes once again took part in the annual Marilyn Jetty Swim in the Brighton Jetty yesterday, in aid of Cancer Council SA, as 7 News Adelaide reports.

Yet another Kardashian sister made her love for Marilyn public this week, as Kylie Jenner recreated her ‘Diamonds Are a Girl’s Best Friend’ look for Halloween. (Of course, unlike most of us when we party in fancy dress, Kylie had a stylist on call, as Elle reports.)

Looking onward to Christmas, singer Mariah Carey – arguably the doyenne of celebrity Monroe fans, and the owner of Norma Jeane’s white grand piano since the Christie’s sale of 1999 – has put her own sartorial stamp on another Travilla creation from Gentlemen Prefer Blondes, wearing a red gown similar to Marilyn’s in the opening song, ‘Two Little Girls From Little Rock’, in a festive ad for Walker’s Crisps.

In 2012, Marilyn was the face of Cannes – and the Champs-Élysées Film Festival uses images of her every year. Now her star will shine over the Middle East, as The 961 reports. (With an impersonator striking a classic Seven Year Itch pose, the LIFF artwork seems inspired by LIFE magazine.)

“Believing that art should have a certain message, the Lebanese International Film Festival (LIFF) chose to fight against the stigma that is attached to mental health issues by collaborating with Embrace, the leading organization that raises awareness about mental issues.

For that particular reason, LIFF opted this year for the image of the iconic renowned superstar Marilyn Monroe as she is an ideal example of a successful woman that was fighting her own battle with mental health. ” 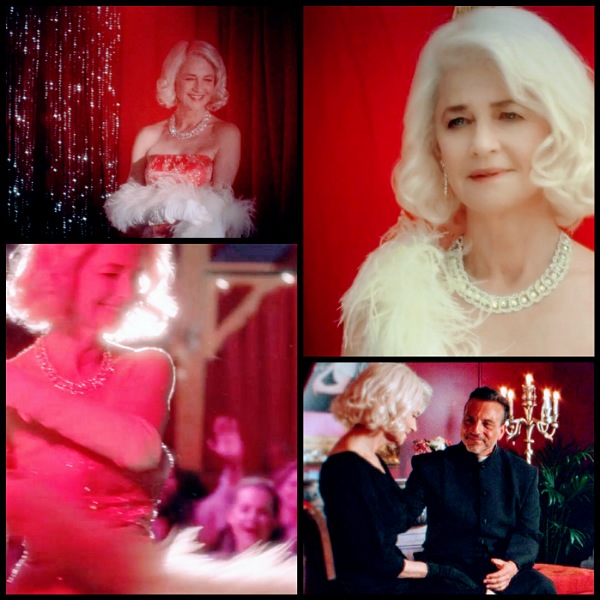 Country singer Willie Nelson and British actress Charlotte Rampling are an unlikely couple, and having Ms Rampling play a Marilyn impersonator is even more surprising. But that’s exactly what you’ll see in their offbeat new movie, Waiting For the Miracle to Come, as Joe Leydon reports for Variety. (It’s available in the US from today on DVD and streaming.)

“Waiting for the Miracle to Come is the first dramatic feature written and directed by Lian Lunson, previously best known for such musical documentaries as Willie Nelson: Down Home … With help and encouragement from mentors and former collaborators — including Bono and Wim Wenders, who are credited among the executive producers, and Leonard Cohen, whose song provides the movie with its title — she mounted this small-budget labor of love with the obvious intent of telling a simple yet resonant story unbound by specifics of time and continuity, but infused with strains of melancholy, regret, and unreasonable hope. Call it a dream play, and you won’t be far off the mark.

Supernatural undercurrents sporadically reach flood level as Adeline Winter (Sophie Lowe), a young woman who dreams of performing as trapeze artist and tightrope walker, takes heed of a letter left by her recently deceased father (Todd Terry), and follows his directive to visit a ranch in Ransom, Calif., where she might find a goldmine. What she finds instead are the aforementioned ex-vaudevillians, Jimmy (Nelson) and Dixie Riggs (Rampling), owners and operators of ‘The Beautiful Place’ — hardly a gold mine, but rather a haven for abandoned horses, a home for two trailer park residents, and a place where Dixie occasionally dolls herself up like her idol, Marilyn Monroe, and sings for locals in a small theater near their memento-stuffed, Christmas-light-bedecked house.” 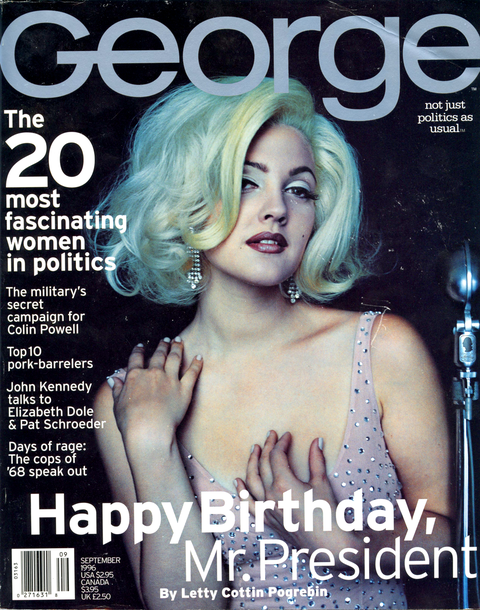 Over at Esquire, Kate Storey reports on George, the political magazine launched by John F. Kennedy Jr. in the 1990s. While some were shocked by the 1996 cover featuring actress Drew Barrymore as Marilyn, the original idea – to have ex-girlfriend Madonna pose as John’s mother, Jackie Kennedy – was even more daring, and a step too far even for the pop superstar. So why was John so willing to send up his own family myths? As the article reveals, it seems that Junior was ahead of his time in exposing fake news… 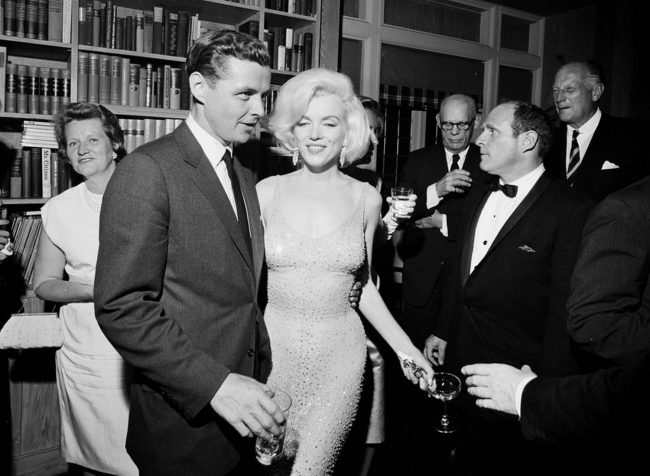 “With Madonna out, the September cover took a decidedly different turn—instead of referencing his mom, Kennedy chose to nod at another well-known woman in his dad’s life: Marilyn Monroe.

Drew Barrymore was posed in a nude-colored cocktail dress and platinum wig, with a mole perfectly placed on her left cheek. The idea came from George’s executive editor, Elizabeth Mitchell, who suggested it as a fiftieth-birthday tribute to President Bill Clinton. The reference: In May 1962, in front of fifteen thousand people during a Democratic-party fundraiser at Madison Square Garden, Monroe had famously serenaded Kennedy’s father ten days before his forty-fifth birthday with a breathy, seductive ‘Happy Birthday, Mr. President.’ The subtext to the song, of course, is that the president and the actress were rumored to have had an affair.

That photograph might seem a strange choice for a man who adored his mother—even stranger than asking Madonna to impersonate her—but the thing was, according to Mitchell, Kennedy never believed anything had happened between his dad and Monroe. ‘He just thought it was sort of tweaking the expectations of the public,’ she says all these years later.” 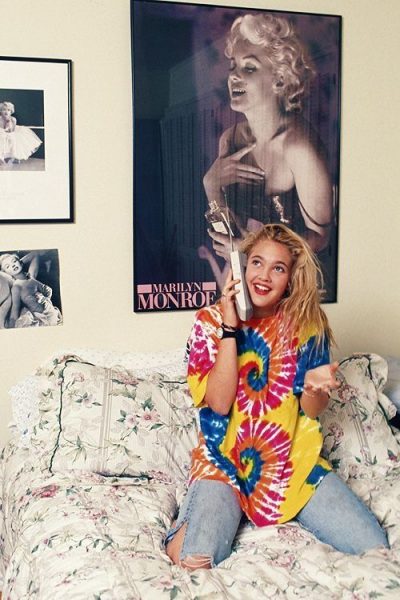 Another aspect to this story is that Drew Barrymore is a lifelong Marilyn fan. As a teenage starlet, she was photographed in her bedroom, surrounded by Monroe posters. In a 2010 interview, Drew named Marilyn among her fantasy dinner guests; and in 2014, she filmed an introduction to Bus Stop with TCM host Robert Osborne.

And while Madonna’s fascination with Monroe is well-known, she had already pipped George to the post by singing ‘Happy Inauguration Mr. President’ on TV’s Saturday Night Live in 1993, marking Clinton’s electoral victory. 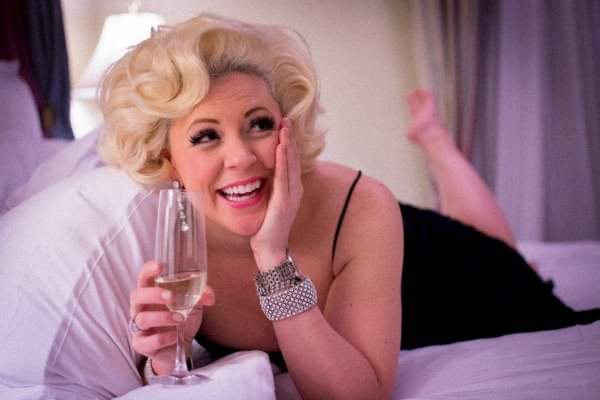 If you’re in Tucson and looking for a St. Valentine’s Day treat, With Love, Marilyn – the touring one-woman show starring actress and singer Erin Sullivan – is playing at the Temple of Music and Art through to Sunday, February 17.