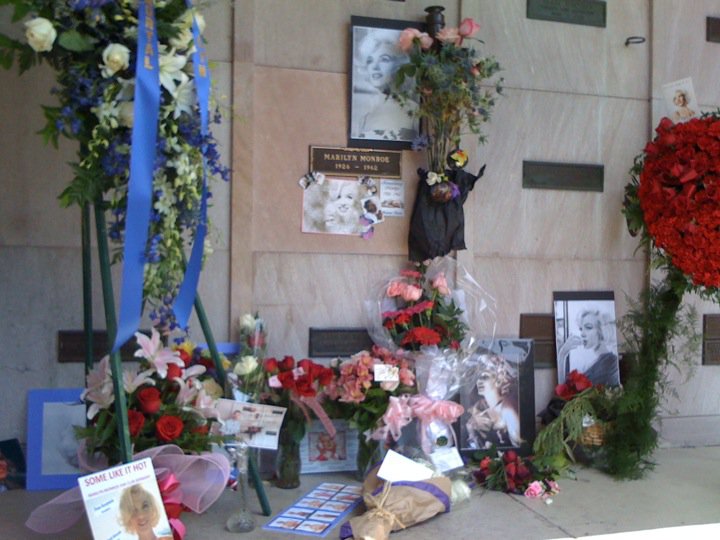 Singer Buddy Greco has spoken to the UK’s Daily Mail about meeting Marilyn Monroe at Frank Sinatra’s Cal-Neva Lodge on Lake Tahoe, just a week before her death.

This so-called ‘last weekend’ (actually, Marilyn died on the following weekend) remains one of the most controversial aspects of Marilyn’s days, and Greco’s memories are bittersweet:

“Buddy Greco recalls of her demeanour later that weekend: ‘She was fragile, very fragile  –  well, she’d gone.’ Many blamed the Kennedys.

Of course, she could still shine when she wanted to. But by now her gloss was too often just a thin veneer.

Despite her depression, she initially appeared in good shape when she arrived at Cal-Neva, after flying there on Sinatra’s private plane.

‘When she arrived that Saturday, you’d never believe that she had a care in the world,’ recalls Buddy Greco. ‘I was sitting with Frank [Sinatra], Peter Lawford and a bunch of other people, outside Frank’s bungalow, when a limousine pulls up and this gorgeous woman in dark glasses steps out,’ he says.

‘I knew that she’d been to my concerts and shows. She was a regular at the Crescendo club in Hollywood where I often played.

‘We’d said hello a few times, but were never properly introduced. When Frank introduced us, I said: “You won’t remember me, but I was the piano player when you auditioned for the Benny Goodman band in 1948.”

‘She got emotional at that and hugged me. She had such warmth  –  and I was moved. Somebody took some wonderful shots of that moment, of us hugging.’

But by the end of the first evening, a darker Monroe was beginning to emerge. Greco had finished his first performance in the hotel’s lounge and had joined Sinatra and the other guests at Sinatra’s regular table.

‘It was a wonderful time, a magical weekend. It is so hard to describe now but it was maybe the best time of my life.

‘Then suddenly the room went silent and very still. It was surreal. As if somebody had turned the sound off. I looked at Frank. I could immediately tell he was furious. His eyes were like blue ice cubes.

‘He was looking at the doorway where Marilyn was stood, swaying ever so slightly.’

‘She was still in the same green outfit she’d worn all day,’ says Greco. ‘But the woman I’d met that afternoon – smart , funny, intelligent, fragile – had gone.

‘Now she looked drunk and, well, defiant. She was clearly angry and I think I heard her say: “Who the f*** are they all staring at?”‘

Sinatra  –  who was obviously irritated by her erratic behaviour  –  acted fast.

‘It was clear Sinatra was worried. She was in a state where she could have said anything,’ says Greco.

This would have been a major concern for many of those around the table. Monroe, after all, knew an awful lot of secrets  –  and, in her condition, might have been prepared to share them.

‘Sinatra motioned to his bodyguard  –  Coochie  –  to get her out of there. Coochie, a big guy, escorted her out. Actually, he picked her up and carried her out. It wasn’t the star we were used to seeing.’

The incident upset Buddy Greco. He had felt such warmth and vulnerability in her only a few hours earlier and could not understand how she had changed so terribly and suddenly.

‘She was on my mind,’ he says. ‘I was worried about her. I went outside to find out whether she was okay. I knew that she had taken accidental overdoses in the past.

‘I found her by the pool. There was nobody around. It was late and the pool was deserted.

‘Maybe it was the moon but she had a ghostly pallor. It still didn’t occur to me that she might be a woman not long for this world.

‘She was distressed, out of it, but that was all. Maybe her friends were used to seeing her like that but it worried me. Anyway, we talked.

‘I walked her back to her bungalow in the complex reserved for the guests of Frank and Giancana where we all stayed.

‘I thought that the next morning I could put her with Pat Lawford [the Kennedys’ sister], who was her companion, and make sure she got back to L.A. safely.

‘But the next day when I called, she had already left. That was the last time I saw her.’ So does he think that Sinatra had finally lost patience with Monroe and by abandoning her had left her to her fate?

‘That’s a possible scenario,’ Greco answered thoughtfully. ‘After she had created that problem, he certainly wanted her out of there. He could be quite firm with her.'”

The article is very speculative, but nonetheless, Greco’s memories are fascinating, as veteran showbiz columnist Liz Smith has noted:

“IT WAS 48 years ago today that Marilyn Monroe died. On the evening of Saturday, August 4, 1962, or the wee hours of Sunday, the fifth. (Talking to her therapist earlier in the day, she exclaimed, “Here I am. I am supposed to be the most glamorous woman in the world, and I don’t have a date on Saturday night!”)

Sinatra, by every account, was totally undone, devastated when word came of Marilyn’s death. (Sinatra’s valet, George Jacobs, believes Sinatra would have married Monroe, if for no other reason than to ‘save her.’) In any case Frank certainly never spoke of what really happened at the Cal Neva Lodge.”

You can read my new article about Marilyn’s friendship with Peter Lawford and his wife, Patricia Kennedy Lawford here.

“In her own lifetime she created a myth of what a poor girl from a deprived background could attain. For the entire world she became a symbol of the eternal feminine.

But I have no words to describe the myth and the legend. I did not know this Marilyn Monroe. We gathered here today, knew only Marilyn – a warm human being, impulsive and shy, sensitive and in fear of rejection, yet ever avid for life and reaching out for fulfillment. I will not insult the privacy of your memory of her – a privacy she sought and treasured – by trying to describe her whom you knew to you who knew her. In our memories of her she remains alive, not only a shadow on the screen or a glamorous personality.

For us Marilyn was a devoted and loyal friend, a colleague constantly reaching for perfection. We shared her pain and difficulties and some of her joys. She was a member of our family. It is difficult to accept the fact that her zest for life has been ended by this dreadful accident.

Despite the heights and brilliance she attained on the screen, she was planning for the future; she was looking forward to participating in the many exciting things which she planned. In her eyes and in mine her career was just beginning.

The dream of her talent, which she had nurtured as a child, was not a mirage. When she first came to me I was amazed at the startling sensitivity which she possessed and which had remained fresh and undimmed, struggling to express itself despite the life to which she had been subjected.

Others were as physically beautiful as she was, but there was obviously something more in her, something that people saw and recognized in her performances and with which they identified. She had a luminous quality – a combination of wistfulness, radiance, yearning – to set her apart and yet make everyone wish to be a part of it, to share in the childish naïveté which was so shy and yet so vibrant.

This quality was even more evident when she was in the stage. I am truly sorry that the public who loved her did not have the opportunity to see her as we did, in many of the roles that foreshadowed what she would have become. Without a doubt she would have been one of the really great actresses of the stage.

Now it is at an end. I hope her death will stir sympathy and understanding for a sensitive artist and a woman who brought joy and pleasure to the world.

I cannot say goodbye. Marilyn never liked goodbyes, but in the peculiar way she had of turning things around so that they faced reality – I will say au revoir. For the country to which she has gone, we must all someday visit.”

thinner than a cobweb’s thread
sheerer than any-