“You know, she would stop whatever she was doing to wave to truck drivers and cabbies who yelled ‘Marilyn!’ to her. She had a lot of their standards … That’s the element, the quality, which every young girl in America could recognise.

I think the major reason for her myth becoming larger and larger every day, for the legend growing on such a gigantic scale, is not the tragedy of her life. It’s the joy of the girl; she presented the joyous moment of a vibrant woman.

More important, she represents the freedom which kids have today. Only, she was fifteen or twenty years ahead of the times, so she paid the price for her freedom.

Anyway, I want to show the nice moments in her life. I think in my own way I don’t gloss over what we look upon as vicious in life. What the hell! You’ve got to be tough to survive in the movie world. And in individual relationships with people. In the emotional life.”

Sam Shaw, The Joy of Marilyn in the Camera Eye

As we reach the 57th anniversary of Marilyn’s death, Megan Monroe reminds us of her true legacy in a timely blog post.

“So many people and society tend to view Marilyn as a victim, passed around from man to man and used throughout her lifetime. This both angers and frustrates not just me, but many fans, who have spent years taking the time to research legitimate sources and find out who Marilyn herself was. Often her death is viewed as a conspiracy-fueled, gossip-loving debate, so much so that she ends up no longer seeming like a young woman anymore, but an object of fascination.

It seems to me that it’s easier for people to believe in the distasteful lies and conspiracies that surround not just Marilyn, but many other celebrities and icons before and after her. People cannot comprehend someone as beautiful, talented and loved as her to have any demons or hardships … In the end Marilyn ends up being turned into a former shadow of her true self, which is just not acceptable to me and so many others – therefore, I will continue to try and dispel the lies and bring back her true character.

Furthermore, Marilyn’s death does not define her – intended or accidental it is still and will always be a tragedy, but, it does not take away from her 36 years of life and the achievements she made during and after her lifetime … Ultimately, this was the real Marilyn, the person that so often gets lost in the publicity of hearsay and money making headlines. “

Berniece was born on July 30, 1919, to John ‘Jap’ Baker and his wife Gladys in Venice, California. She was their second child, Robert (or ‘Jackie’) having been born in 1917. Baker was sixteen years older than Gladys, who had married him aged just fifteen. The marriage was not a happy one, and in 1923, they separated. After the divorce, Baker abducted both children and returned to his hometown of Flat Lick, Kentucky. Gladys followed them there, but was unable to recover her children. She eventually returned to Los Angeles and after another failed marriage, became pregnant with Norma Jeane who was born in 1926.

In 1933, Berniece’s brother Robert tragically died aged sixteen. Two years later, Gladys suffered a nervous breakdown and would spend much of her later life under psychiatric care. Berniece, who believed her mother was dead, received a letter from Gladys in 1938 and also learned of her half-sister’s existence for the first time. The two ‘sisters’ began a warm correspondence. At nineteen, Berniece had just graduated from college and was about to marry her long-term boyfriend, Paris Miracle. Their daughter, Mona Rae Miracle, was born in 1939, and the family moved north to Detroit, Michigan.

In 1944, Norma Jeane travelled to Detroit where she finally met Berniece in person. Two years later, Berniece – now living in Oak Ridge, Tennessee – visited her half-sister, now a successful model and aspiring actress under her new name of Marilyn Monroe, in Los Angeles.

In 1951, Berniece moved to Gainesville, Florida, and would later work as a bookkeeper at the University of Florida, while Mona Rae qualified as a schoolteacher in 1957 and was married a year later.

Although the sisters stayed in touch throughout Marilyn’s rise to fame, they would not meet again until 1961, when she asked Berniece to stay with her in New York as she recuperated from gallbladder surgery. Sadly this would be their last reunion, and in August 1962, Berniece was one of the first to hear of Marilyn’s death from her ex-husband, Joe DiMaggio. She travelled to Los Angeles to help Joe and Inez Melson (Marilyn’s business manager, and legal guardian to Gladys) and attend her sister’s funeral. She and Mona Rae were among the beneficiaries of Marilyn’s will.

In 1967, Gladys left Rockhaven Sanitarium in California, and moved to Florida to live with her daughter. A few years later, she entered a nursing home. Gladys survived until 1984, and was joined in death by Paris Miracle six years later. My Sister Marilyn, co-written by Berniece and Mona Rae, was published in 1994. It is one of the most tender and intimate books ever written about Marilyn, and an essential read for anyone seeking a truthful account of her family background.

This week marks 63 years since Marilyn married Arthur Miller, and the newlyweds (as photographed by Jack Cardiff a few weeks later) Grace the cover of Le Nouveau Magazine Litteraire‘s summer double-issue (#19), as part of a feature on ‘Literary Couples and Crossed Destinies’, with a short profile inside by Philippe Labro. The magazine is now available from the Newsstand website for £7.78.

Thanks to Eric Patry and Fraser Penney

Paul Donnelley, author of Pocket Essentials: Marilyn Monroe (2000), has written a list of trivia for the UK’s Daily Star, in advance of what would be Marilyn’s 93rd birthday this Saturday, June 1st. Here are a few selections…

“Marilyn was born in Los Angeles as Norma Jeane Mortenson. She was not named for fellow blonde bombshell Jean Harlow despite numerous reports to that effect – when Marilyn was born, Harlow was only 15 and at least two years away from her film debut.”

“Marilyn has a reputation for being promiscuous but she was choosy about who she bedded. Groucho Marx confessed he spent $8,000 wining and dining her, trying to get her into bed but was unsuccessful. Harry Cohn, the head of Columbia Pictures, tore up her contract because she wouldn’t sleep with him.”

Today, May 27, marks seventy years since a little-known actress posed nude for photographer Tom Kelley. The photos were sold to a calendar company, and three years later, someone recognised the model as Marilyn Monroe. Against studio advice, she admitted it and the public loved her for it. Lorraine Nicol tells us the full story today, over at Marilyn Remembered.

The great American songwriter was born on this day in 1888, and lived to the grand old age of 101. To celebrate this musical anniversary, Matt Micucci has posted a playlist featuring Marilyn’s version of ‘Lazy’ (as performed in the 1954 movie There’s No Business Like Show Business, an all-star tribute to Berlin), and ‘You’d Be Surprised’, as well as Ethel Waters’ original 1933 version of ‘Heat Wave’ and other Berlin classics, over at the JAZZIZ website. 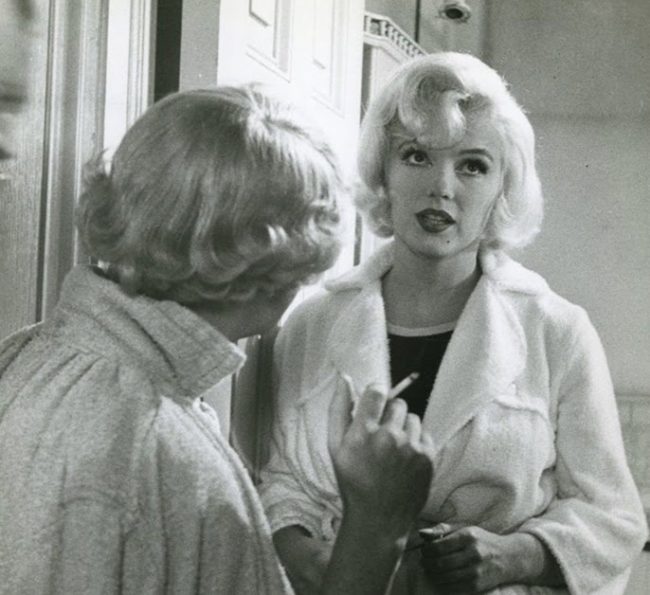 Another 60th anniversary tribute to Some Like It Hot, this time from Simi Horowitz at the Hollywood Reporter.

“Yet at its core, the film is about sexual relations and attraction, and to judge by some of the film’s 1959 reviews it was pushing the good-taste envelope. Repeatedly, our two very heterosexual leads are suppressing their arousal as they’re flanked on all sides by nubile female musicians. In one legendary snippet, these nightie-clad instrumentalists are frolicking about in a train berth with Jerry/Daphne, for whom the experience is by turns delightful and tormenting.

And how’s this for a bit of convention-defying vulgarity? The women are heavy-duty drinkers and sexually schooled, and not feeling unhappy about it at all. On the contrary, they’re boisterous, living out loud and having a hell of a time reveling in their agency.

Admittedly, Sugar Kane has been exploited by love’em-and-leave’em saxophone players. But make no mistake: She milks her victimization for all it’s worth. Like Monroe herself, Sugar is an embodiment of the male fantasy (breathless, helpless and in need of saving), and employs it to her advantage. When Joe, in the guise of Junior, who is trying hard to evoke Cary Grant, says he likes classical music, Sugar lies outright, proclaiming she studied at the Sheboygan Conservatory. The film is a heady celebration of play-acting.

Manipulation and deception are the name of the game, and everyone indulges with impunity. Even at the end, when Jerry admits to Sugar that he’s a lying louse, just another one of her abusive saxophone players, he hasn’t really changed and neither has she. But true to movie tradition, heterosexual love conquers all — or does it?

Wilder’s universe is far too nuanced for anything as obvious as that. Here, homoerotic twists are everywhere — not least the full mouth-on-mouth kiss between Sugar and Josephine. It’s the turning point when Sugar realizes that Josephine and Junior are one and the same. The line straddling best female bud and male lover is fluid; Sugar adores both sides of that mask, conceivably loving Josephine even more, while Joe has virtually disappeared in the melee of disguises.”