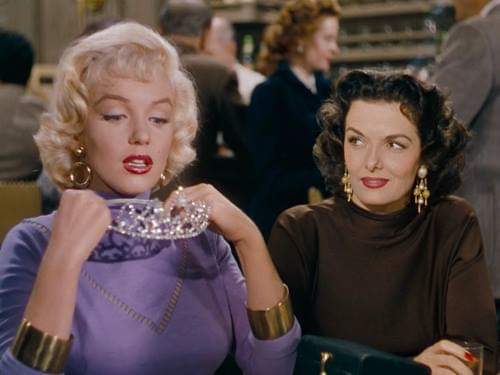 Over at Refinery 29, Daniela Morsini looks at the ‘dumb blonde’ stereotype so unfairly applied to Marilyn, and still a staple of lame jokes today. While I strongly agree that it’s an outdated, sexist trope, I’d like to add that in her movies, Marilyn often parodied those assumptions. Her characters were usually wiser than the men who flocked to them, and in reality, Marilyn was sensitive and intelligent. (Unfortunately, not everyone was smart enough to get the joke – then, or now!)

Of course, of all the stereotypes women face, the ‘dumb blonde’ is a mild one, especially considering how harmful and dangerous the hair stereotypes faced by women of colour can be. But it is curiously persistent … I’ve never forgotten a date in 2016, after having what I believed to be pleasant chatter with a man for an evening, him uttering the immortal words: ‘Well, you don’t look clever.’

Historians roundly agree that the notion of blondes being dumb dates back to a play performed some 250 years ago, titled Les Curiosités de la Foire, based on the misdemeanours of the legendary courtesan Rosalie Duthé, which established blondes as both stupid and sexually available. Duthé took long pauses before she spoke, leading people to believe she was literally dumb, as well as stupid. Fast forward to 1953, and Gentlemen Prefer Blondes hit the box office with Marilyn Monroe as Lorelei, epitomised as the dumb blonde. Portrayed as absent minded, slightly scatty and interested in marrying solely for money, some of Lorelei’s most famous lines only serve to emphasise the stereotype: ‘I can be smart when it’s important, but most men don’t like it.’

Over time, the dumb blonde trope has morphed into the ‘beauty and brains’ dichotomy, which at least allows a whole other crop of women to have their intelligence questioned. This is not a step forward, even if it does represent inching away from Western beauty ideals. Calling a blonde ‘dumb’ is a surprisingly effective way to curb someone’s appetite for life and confidence in their own abilities, effective enough to render them docile so they can’t unlock their powers.”