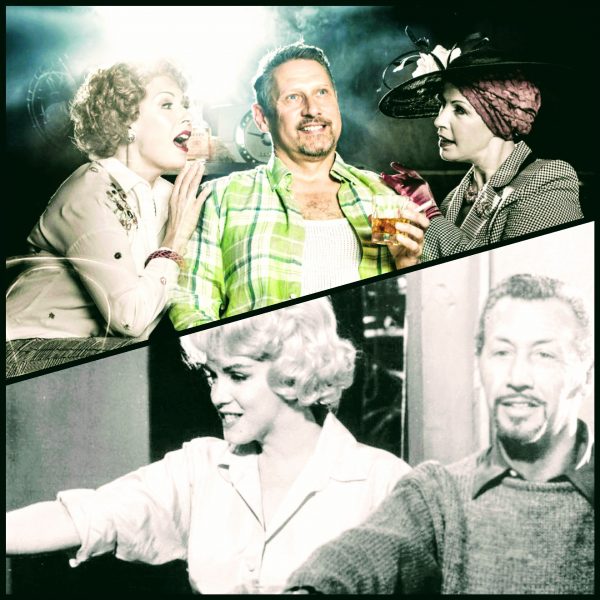 Goodbye Norma Jeane, the new play about ‘dance director’ Jack Cole and the movie goddesses he coached – set in the aftermath of Marilyn Monroe’s death  in 1962 – has opened at the Above The Stag studio theatre in Vauxhall, South London, and will be playing there until April 7.

“When Marilyn Monroe died, not just Hollywood but the whole world cried the loss of a bright star and famously seductive beauty. For some, though, down with the blonde bombshell went an entire career and a lifelong source of inspiration … It’s particularly interesting how the script manages to reproduce a nostalgic, yet not too sentimental, aura of the ‘baby doll’ culture, through the dialogues and profiles of other notable females in show business.” – Cristiana Ferrauti, The Upcoming

“Marilyn Monroe has been endlessly mythologised and it’s difficult to approach her story afresh without it feeling cliched. The linking metaphor – Cole can’t own his dance steps just as Monroe’s image ceased to be her own – is affecting, though. But it could have been integrated into a more detailed exploration of Cole’s own life and his place in the history of dance.” – Julia Rank, The Stage

“Liam Burke’s play is about authority over women’s bodies, yet the story is told from the perspective of a man claiming a woman’s glory. Referred to throughout by her birth name, Norma Jeane, or – patronisingly – as ‘babydoll’, Monroe is a peripheral figure, put down and shoved aside for Cole to remind us repeatedly that she would be nothing without him … His monologue is interrupted by visits from former muses, with Rachel Stanley kept busy multi-rolling them all. These women are brightly painted in clothes rather than character; each silly, frilly, posturing visitor is quickly shooed behind a curtain, simply a catalyst for Cole’s next anecdote.” – Kate Wyver, The Guardian

“As much as Stanley brings, charm, wit and energy aplenty, she isn’t afforded enough on-stage time or gritty dialogue for a nuanced portrayal of these groundbreaking stars. Still, her exaggerated flourishes and vocal inflexions are a welcome relief from Cole’s decidedly more one-note monologues, which at times feel a little preachy … the breaks into song and dance are well executed and ripe with nostalgia, while Stanley’s repeated quick changes are a marvel in and of themselves – a stark contrast to the otherwise sluggish pace of act one.” – Jack Pusey, Daily Star