“In 1925, Loos published her masterpiece, first as short stories in Harper’s Weekly and then as a full-length novel. Gentlemen Prefer Blondes is a comic tour de force, and no less than Edith Wharton called it ‘The great American novel’. This breathless and ungrammatical text is presented as the no-holds-barred diary of one Lorelei Lee, a beautiful blonde gold-digger from Little Rock, Arkansas, and her adventures in pursuit of a diamond tiara with her friend Dorothy, a brunette with a one-track mind.

When the talkies came in, Loos was hired by Irving Thalberg to work for MGM … Who better than Loos, for example to write a script for Jean Harlow, the 1930s ultimate Lorelei Lee type, breathless, blonde and babyishly naïve? Except she was adapting a book by Katharine Brush called Red-Headed Woman, which was a cue for plenty of promotional jollity.

After this, Loos went back to New York, and wrote for the stage – not without success. She wrote the book for a musical adaptation of Gentlemen Prefer Blondes, which was a little milder than the novel and starred Carol Channing and Yvonne Adair as Lorelei and Dorothy. 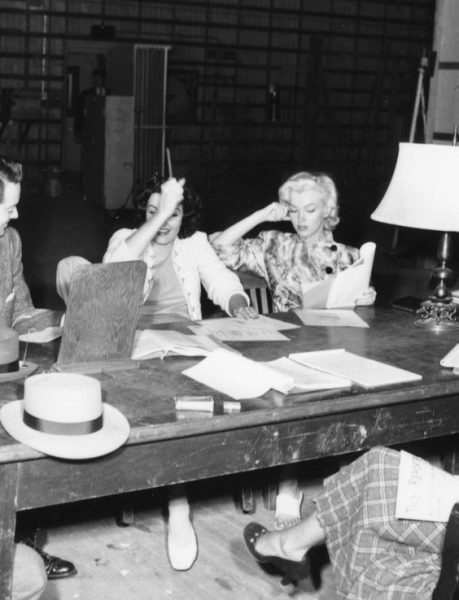 Then, of course, 20th Century-Fox and Howard Hawks came for Gentlemen Prefer Blondes. It remains a great joy to see two great comediennes, Marilyn Monroe and Jane Russell, both of whom were exploited by Hollywood in their turn, enacting this superb comic revenge on stupid men. The 1953 film has some great moments, but it’s a little sluggish in between times. Never mind: the song Diamonds are Girl’s Best Friend is the best possible tribute to Loos’s satirical pen, and the staging of Isn’t There Anyone Here for Love? in which Russell cavorts among an entire male Olympic team, must surely have tickled her. But Loos had nothing to do with the production, having struggled with her writing partner on the stage version. She did, however, say that Monroe was sublime casting. And of course, she was 100% right.”