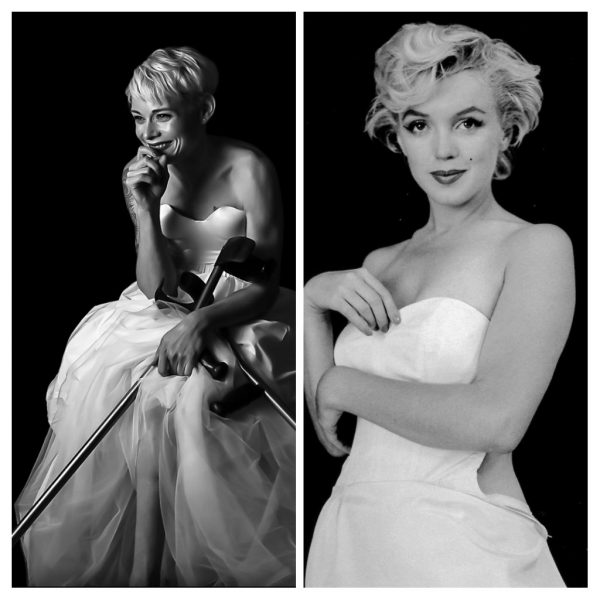 A new photography exhibit in The People’s Gallery at City Hall in Austin, Texas celebrates women with disabilities, including a portrait shot by Greg Mitchum – which recalls Marilyn’s 1954 ‘ballerina sitting’ with Milton Greene – as Laura Jones reports for the Austin Chronicle.

“‘Sometimes I hear mothers with young children telling their kids not to stare at me,’ says the pretty blond model, as we talk over the phone. I’d watched videos of her online, dancing with the help of her crutches. Seen her Marilyn Monroe-style photographs – white dress, flirty smile – at the People’s Gallery exhibit at City Hall. ‘I always tell people, “It’s okay. Go ahead and stare.” We are human beings, so we are going to notice difference, but we don’t have to make it all of what a person is about.’

This model’s name is Tanya Winters. She’s a 42-year-old woman with cerebral palsy who is, among other things, an accomplished dancer, choreographer, and president of the board of VSA Texas. When she dances, she does so on her crutches, an image many people may not be used to, but a captivating one nonetheless. Photographs of Winters, along with 19 other disabled women, are currently on display at City Hall as part of a People’s Gallery capsule exhibit created by the Bold Beauty Project of Texas. The goal of the project is to show disabled women in a new light.

For Winters’ portrait, she worked with photographer Greg Mitchum to create a blend of four images modeled on one of Marilyn Monroe’s iconic looks. Each image, she says, represents a different side of her personality: a shy side, a strong side, a side that is fun and spontaneous. Two of the photographs feature her crutches, one her wheelchair, because, she says, ‘I use both and both are a part of me.’ Monroe, to her, is an icon. ‘To add my disability to that was very important to me and to disability culture,’ Winters says.”