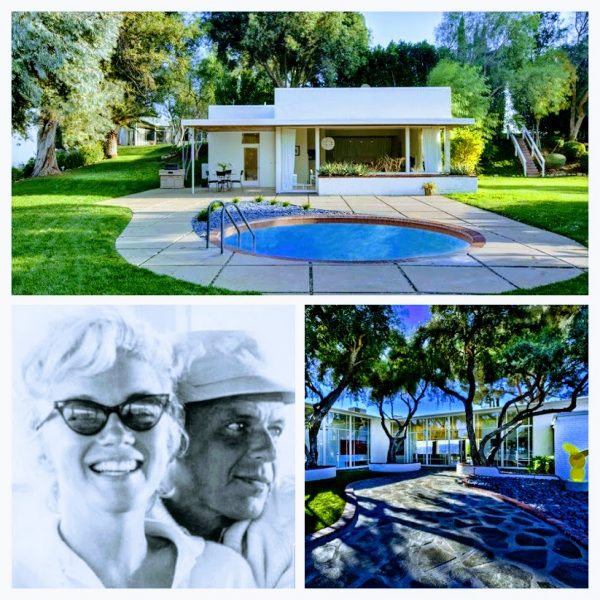 Unlike her celebrity peers, Marilyn preferred to live modestly. Nonetheless, you may recall that a Los Angeles home she shared with Joe DiMaggio was recently put on the market (see here) – and it has now been joined by two luxury estates with connections to Marilyn. As reported in Architectural Digest, Frank Sinatra’s former Los Angeles home is on sale for $12.5 million.  (It was last put up for sale in 2012, as reported here.)

Marilyn stayed in Sinatra’s guesthouse (shown at top) in 1961. They were having an on-off relationship, and Frank was abroad on tour. She later spent a few months renting an apartment in the Doheny Drive complex he owned, as a neighbour to his secretary, Gloria Lovell.

“Old Blue Eyes himself lived in the sprawling home in the 1950s and 60s and frequently hosted his famous friends … the home seems preordained to shelter celebrities from the Hollywood hullabaloo, as it rests at the end of a near mile-long driveway atop a private promontory that overlooks the vast 1,325-acre Chatsworth Reservoir nature preserve.

Constructed in 1949 by William Pereira, Byrdview is only one of four homes the famed architect designed. Sitting on seven acres, the midcentury-modern house comprises three structures: the main house, a guest house (with its own pool), and a cabana … Outdoors, beyond the pool, there’s a parking space for 100 cars and enough agricultural-zoned acreage that, should the new owners like their wines, a vineyard could be built.” 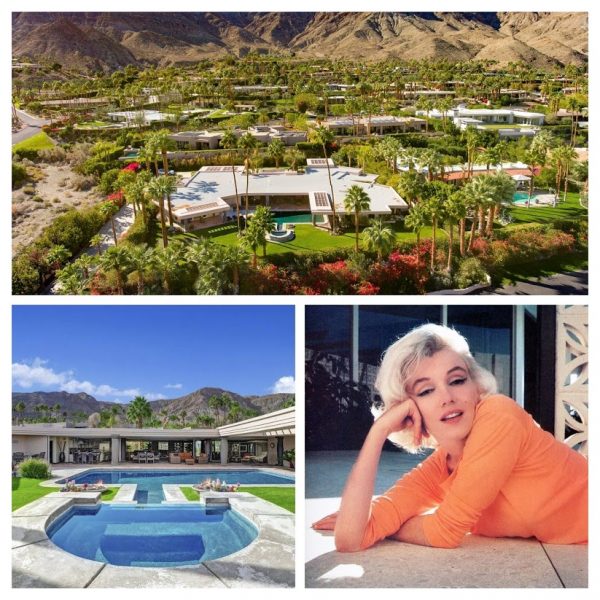 Secondly, the Rancho Mirage estate of Bing Crosby (near Palm Springs), where Marilyn and John F. Kennedy were among the weekend guests during the March 1962 Democratic Convention, is on sale for $5 million ( although the property has been available for some time, as reported here.) This is the only verified occasion when Marilyn and the president spent a night at the same address, and rather predictably, it’s being promoted as ‘the tryst house’, according to Bloomberg. (Incidentally, Sinatra had hoped to host Kennedy and was reportedly furious that he chose Crosby, a Republican, instead!)

“The 6,700-square-foot estate, spread across more than an acre, was built for the crooner and his second wife, Kathryn, in 1957. The single-story home, with a 1,400-square-foot master suite along with four other en-suite bedrooms, has been on and off the market since 2010, when it was first listed for $3.4 million. It’s also been available for rent through Airbnb for $3,400 a night.”