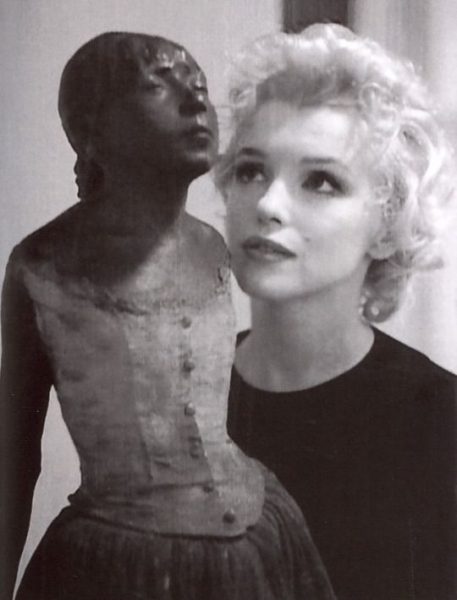 Bus Stop director Joshua Logan took this charming photograph of Marilyn with Edgar Degas’ most famous sculpture at the home of William B. Goetz, Vice-President of Twentieth Century Fox, in 1956. In a new book, Little Dancer Aged Fourteen, author Camille Laurens traces the history of a modern masterpiece, as Celia Wren reports for the Washington Post.

“By creating a sculpture largely made of wax — and wearing real clothing and shoes — Degas was rejecting prevailing aesthetic rules. In the late 19th century, such a piece would have struck viewers as worthy of a toy shop or milliner’s window, not a high-art showcase. Just as shocking was the subject matter: Degas was paying tribute to one of the young Paris Opera dance trainees known as ‘little rats,’ a group that had a scandalous reputation, largely because of their generally impoverished backgrounds, which made them easy prey for lecherous men. ‘Little Dancer’ stirred controversy when it initially appeared in a Paris exhibition in 1881.”

When she first saw the Little Dancer, Marilyn was moved to tears. Art historian Monica Bowen has explored Marilyn’s love of art on her blog, Alberti’s Widow. “I have been researching stars and celebrities of the mid-20th century over the past several months,” she wrote in 2016. “Out of all of the people that I have studied thus far, Marilyn Monroe stands out as one of the people who is most interested in the Western artistic tradition.”