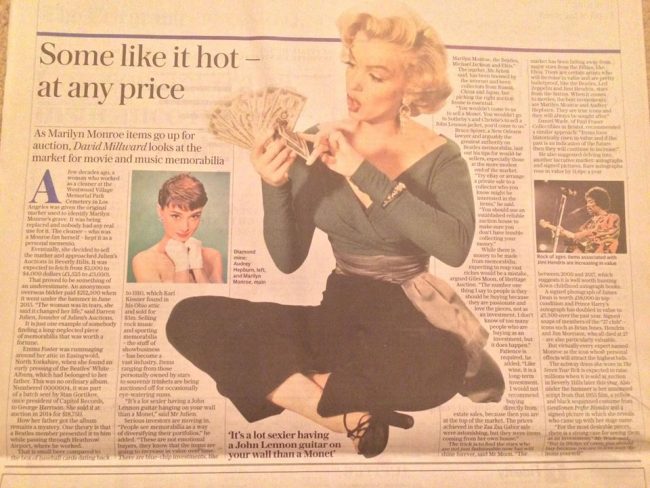 In an article for the Telegraph, David Millward explores the growing market for music and movie memorabilia – ahead of December’s ‘Essentially Marilyn‘ auction at Profiles in History.

“A few decades ago, a woman who worked as a cleaner at the Westwood Village Memorial Park Cemetery in Los Angeles was given the original marker used to identify Marilyn Monroe’s grave.

It was being replaced and nobody had any real use for it. The cleaner – who was a Monroe fan herself – kept it as a personal memento.

That proved to be something of an underestimate. An anonymous overseas bidder paid $212,500 when it went under the hammer in June 2015. ‘The woman was in tears, she said it changed her life,’ said Darren Julien, founder of Julien’s Auctions.

While there is money to be made from memorabilia, expecting to reap vast riches would be a mistake, argued Giles Moon, of Heritage Auctions.

‘The number one thing I say to people is they should be buying because they are passionate and love the pieces, not as an investment. I don’t know of too many people who are buying as an investment, but it does happen.’

The trick is to find the stars who are not just fashionable now but will be popular forever, said Mr Moon. “The market has been falling away from major stars from the Fifties, like Elvis.’

‘There are certain artists who will increase in value and are pretty bulletproof …When it comes to movies, the best investments are Marilyn Monroe and Audrey Hepburn. They are true icons and they will always be sought after.’

But virtually every expert named Monroe as the icon whose personal effects will attract the highest bids.

[A replica of] the subway dress she wore in The Seven Year Itch [will be] sold at auction in Beverly Hills later this year. Also under the hammer is her annotated script from the 1955 film, the yellow and black sequinned costume from Gentlemen Prefer Blondes and a signed picture in which she reveals who came up with her stage name.”

With thanks to Fraser