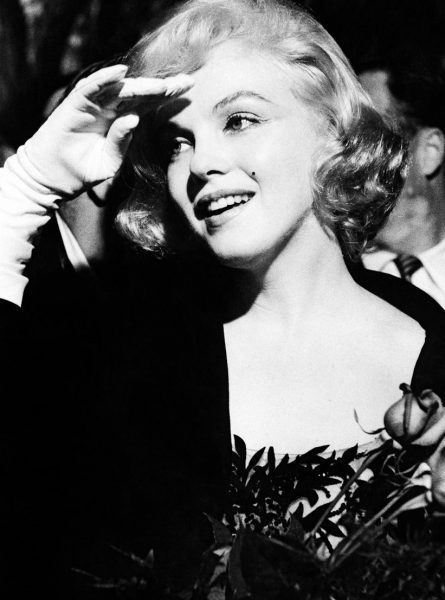 Henri Dauman, the French-born photographer who came to New York after losing both parents in World War II, is the subject of a new documentary,  Henri Dauman: Looking Up, which will premiere this weekend at the Hamptons International Film Festival. Dauman photographed Marilyn on several occasions, including the 1959 David di Donatello Awards (see above.) He has spoken about his long career in an interview for The Hamptons website.

“Henri Dauman is one of the world’s most preeminent photographers, working with the likes of JFK, Elvis Presley, Marilyn Monroe, Andy Warhol, Jane Fonda, Malcolm X, Miles Davis, Yves Saint-Laurent and many, many more. However, since Dauman came of age during a time when photographers weren’t widely recognized for their exceptional works, he’s not necessarily a household name, as he well deserves to be.

The photographer was featured in his first solo exhibition in 2014, and his photos have been showcased in several more since. Now his extraordinary life is the subject of the directorial debut of Peter Kenneth Jones’ Henri Dauman: Looking Up…

How did moving to New York impact your photography?

HD: A lot because all of the sudden I was in the land that I was dreaming about while seeing American movies. When I was a child I went quite a bit to the movies and saw a lot of American movies. I said, ‘My god, I finally landed in Hollywood-land.’ I was very impressed with the skyscrapers, the size of the city, which was different than Paris which is smaller on the human scale. Here, everything was large…

What does it mean to you that your work still resonates deeply with people, many, many years after these photographs were initially taken?

HD: I’m very pleased because I thought my work was fading away, but apparently, unbeknownst to me, I had covered a great story overall of the evolution of the United States from the ’50s to the ’80s. I didn’t know it at the time, but I did so many varied stories – whether it’s a civil rights story or shooting Marilyn Monroe or Brigitte Bardot, when you add up all the stories, it added up to a narrative history of the United States.”