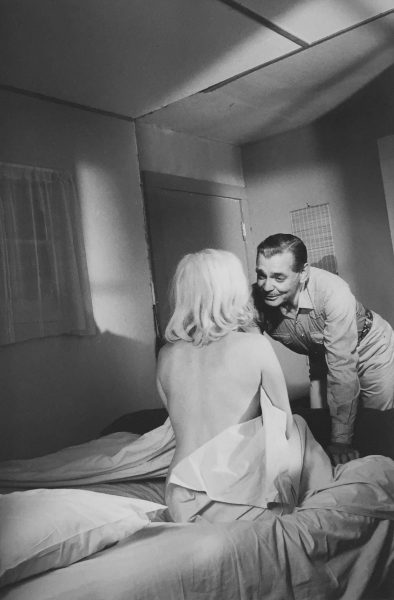 A briefly nude scene from The Misfits – cut by director John Huston – may have survived, according to Charles Casillo, author of the new biography, Marilyn Monroe: The Private Life of a Public Icon.

Still photos attest that Marilyn was indeed semi-nude in the bedroom scene, in which stayed in the movie after being edited. She wanted to keep the footage intact, but Huston dismissed the idea. Marilyn was more attuned to the mood of the times, as minor nudity was already becoming commonplace in films made in Europe.

“Charles Casillo interviewed Curtice Taylor, son of the film’s producer Frank Taylor, and was taken aback to learn that he has kept the footage in a locked cabinet since his father’s death in 1999.

Mr Taylor said: ‘A lot of times, unused takes were destroyed. But Frank Taylor believed that it was so important and so ground-breaking that he saved it.’

The footage, with sound, lasts about 45 seconds. Curtice Taylor, a photographer and teacher, understands why his father was so keen to include it: ‘It’s much more passionate.’

He said: ‘So Gable’s fully clothed. He comes into her bedroom. She’s asleep. He caresses and kisses her neck, turns her face around and gives her a good lip-lock. That exists in the scene in the [final] film – but not to the passionate degree of this one, which is much better. The smile on her face when he’s kissing her shoulder is just sublime.’

After Gable leaves the room, Ms Monroe holds up the sheet to put on her blouse. Mr Taylor believes that she dropped it partly due to her training as a method actress.

He said: ‘Why would a woman sitting up in bed, with nobody in the room, pull the sheet up and then try to put a blouse on at the same time? It makes no sense. So she just drops the sheet. I think it’s one of the reasons she did this. There are quite a few takes of this scene. Whenever she dropped the sheet, which she did a few times, Huston would say “Cut, remember the sheet, Marilyn”.’

Mr Taylor was surprised that the footage is an edited sequence, and wonders whether the censors had insisted on its removal.

He attended the shoot at just 13-years-old, and said he remembers Ms Monroe talking to him and asking him to do ‘little favours’. He said: ‘She’d give me $5 to go get something.'”