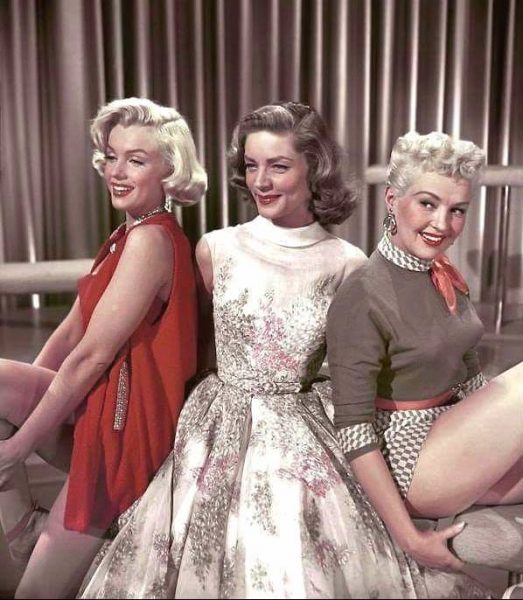 Jon W. Chu, director of this summer’s hit comedy Crazy Rich Asians, was influenced by How to Marry a Millionaire, as Christopher Campbell reports for Film School Rejects. (Although Millionaire isn’t a musical, it’s great to see it still inspiring today’s filmmakers.)

“Growing up in America, Chu likely was exposed more to Hollywood musicals than anything that looked like Crazy Rich Asians. In an interview for Birth.Movies.Death, he cites the movie How to Marry a Millionaire (pictured) starring Marilyn Monroe, Lauren Bacall, and Betty Grable as women who, unlike Rachel in Crazy Rich Asians, are gold diggers trying to snag a wealthy beau. Chu says:

‘I was taking from old musicals like How to Marry a Millionaire – old Hollywood films, and I love the idea that we could have been in those movies, but we weren’t. We had the same style and swag. So to be able to nod to that in our score, our costumes, was really nice…’

While you’re at it, go ahead and watch Marilyn Monroe’s other hit musical from the same year, Gentlemen Prefer Blondes. She plays a golddigger in that movie, too, and famously sings about her love of diamonds in a musical number that inspired the video for Madonna’s ‘Material Girl,’ which is on the Crazy Rich Asians soundtrack as covered by Sally Yeh.”