Marilyn! The New Musical has opened at the Paris Theatre in Las Vegas to mixed reviews…

“The grand opening performance on June 1 was a rapid-fire affair, bouncing from song to song with roller-coaster momentum and an extraordinary amount of emotion from a gifted cast anchored by Ruby Lewis as Marilyn.

This is only the beginning. It will be exciting to see how Marilyn! evolves over time, but the Vegas entertainment community is already grateful to have an original piece of musical theater on the Strip stage.” – Brocke Radke, Las Vegas Sun

“The numbers most pleasing to the ear are a series of duets between Marilyn (Ruby Lewis) and her younger self, Norma Jeane (Brittney Bertier). While it’s best to ignore the lyrics, the music lends itself nicely to the melding of two excellent voices.

The overwhelming strength of this production is its cast. Ruby Lewis is a fine singer and actress, and does the best she can with a book that gives her little opportunity for character development.” – Mary LaFrance, Talkin’ Broadway 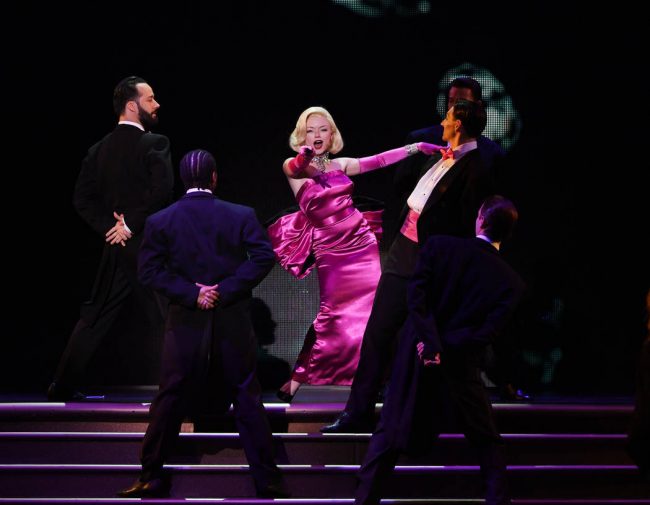 “Marilyn Monroe was a troubled soul — and a divided personality, the blond bombshell forever haunted by the troubled young woman inside. So perhaps it’s fitting that Marilyn! — the new Monroe musical at Paris Las Vegas — suffers from split-personality syndrome. It wants to be a fizzy, showbizzy Vegas musical eager to wow you with sass and pizazz. Yet it never figures out how to do that while recounting the frequently sad facts of Monroe’s all-too-short life.

Lewis makes a visually convincing Monroe, although she’s less consistent vocally. Especially when she shifts from speaking to singing, replacing Monroe’s breathy purr with her own powerful belting, thereby undercutting the vulnerability that helped make Monroe so much more than the latest in a long line of foxy blondes.” – Carol Cling, Las Vegas Review-Journal