Marilyn! The New Musical is set to close on June 17 (after just twenty-three performances), Scott Roeben reports for Vital Vegas. While a press release states that the show is merely ‘on hiatus’, Roeben predicts it won’t be coming back.

“From what we hear, the implosion of Marilyn! The New Musical had little to do with the talent of its cast. Even as the show opened, there were rumors of behind-the-scenes drama, including a lack of competent direction and serious financial issues, and entertainment insiders predicted the show would have a very short run.” 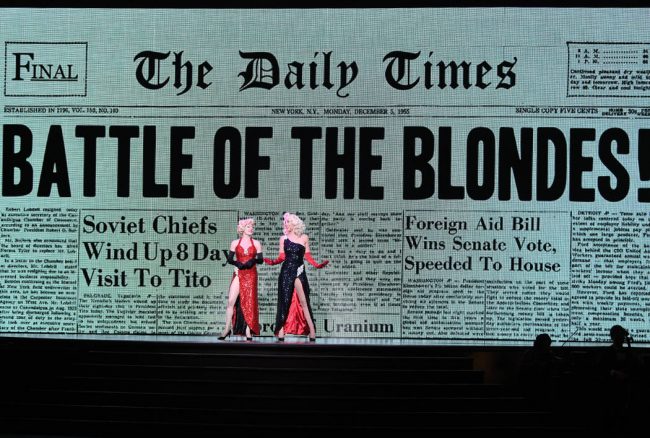 “Sources also report that producer Tegan Summer, founder of Prospect House Entertainment, is seeking a new investor in the project. Those reports are in line with a production that has abruptly lost its primary funding and is forced to go dark while looking for more money.

Marilyn! also suffered myriad unexpected obstacles, such as the late delivery of its stage set — reportedly producers used a company not experienced in furnishing sets to Strip production shows. Thus, the show’s scenery, crucial to any production’s aesthetics, was not completed until the week after its premiere.

But commonly, if a production show holds its financial investment, it can ride out such early production snags. It can also weather a poor reception.

Lewis, who devoted up to four hours a day working with Summer on mastering the title role, said today, ‘I’m pretty bummed out. It’s back to the drawing board, I’m afraid.’ Lewis, who left Baz at Palazzo Theater to join the production, is working on a new album.”