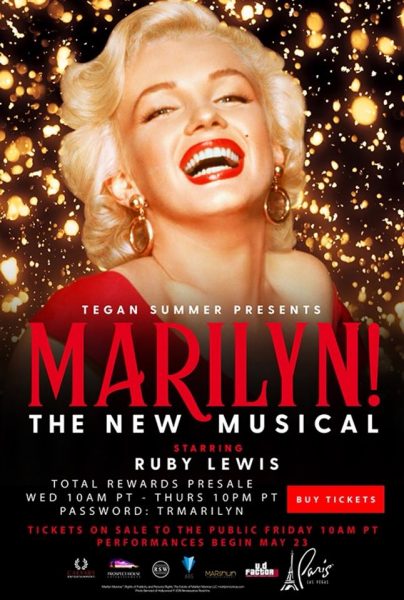 Marilyn! The New Musical, produced in association with ABG – the licensing wing of Marilyn’s estate – is coming to Las Vegas, NBC reports. A version of this show was first staged in Glendale, California back in 2016, but I understand there have been some personnel changes since then. As diehard fans will know, official approval is not always a guarantee of quality but let’s hope this will be an entertaining tribute.

“One of Hollywood’s most iconic stars is coming to the Las Vegas Strip in Marilyn! The New Musical, an original musical based on the life of Marilyn Monroe. The show will open at Paris Las Vegas with preview performances beginning May 23 and a grand opening June 1, just in time for Marilyn’s birthday. Written, directed and produced by Tegan Summer, CEO of Prospect House Entertainment, in partnership with Authentic Brands Group, owner of the Estate of Marilyn Monroe, the new musical will feature acclaimed Broadway actress Ruby Lewis as the resident Marilyn Monroe.

Marilyn! The New Musical features 20 original musical numbers as well as classics like ‘Diamonds Are a Girl’s Best Friend’ and ‘My Heart Belongs to Daddy,’ telling the story of one of the world’s most famous women, from her days as Norma Jeane overcoming a difficult childhood, to her meteoric rise to stardom and becoming one of the biggest and most enduring sex symbols of all time.