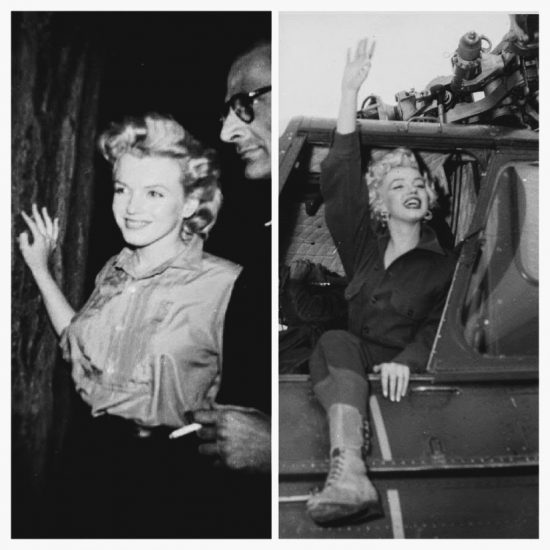 A recent obituary for a Korea veteran in the Hartford Courant includes a reference to Marilyn’s 1954 visit. (I wonder if he ever bumped into Marilyn after she moved to Connecticut with Arthur Miller in 1956?)

“Gordon Thomas Calano died peacefully in his sleep in Hobe Sound, Florida, on April 9, 2018 …  Gordon was born on July 1, 1929, in Hartford, Connecticut. He graduated from East Hartford High School in 1947 and from the University of Connecticut in 1951, leaving soon after for Korea, where he served in the army for two years as a war correspondent and earned a Purple Heart. One of his most treasured memories was acting as Marilyn Monroe’s personal escort while she entertained the troops. Following military service, Gordon taught English and history at East Hartford High before launching Calano Furniture … “

Elsewhere in Connecticut, Greenwich Time reports on a new book by local author Matthew Bernard,  Victorian Summer: The Historic Houses of Belle Haven Park, which also has a link to Marilyn, Arthur, and the producer of The Misfits.

“The house he grew up in, for instance, was previously owned by Frank Taylor, publisher of Playbill magazine and a Broadway and film producer. Taylor entertained major creative talents at the home, including Marilyn Monroe and Arthur Miller…”