Reviews are coming in for Twilight Time’s limited Blu-Ray release of Don’t Bother to Knock.  First of all, here’s some thoughts from Lorraine at Marilyn Remembered:

“It is STUNNING! Honestly worth it for the packaging alone! I’ve had a sneak peek and it’s very well done, although the only down side is that the inclusion of the wonderful documentary The Mortal Goddess as a special feature is just the 45 min version, not the full 90 min version.” 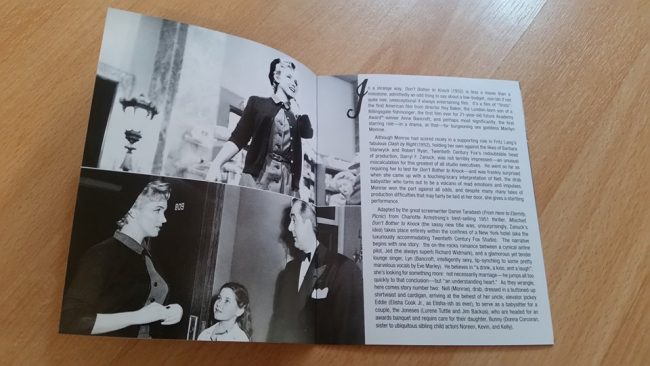 Next up is a review from Mike Clark at Media Play News:

“Filmed on three or four simple sets and clocking in at just 76 minutes, Don’t Bother to Knock is an unusual movie for Marilyn Monroe to have made just as she was on the brink of the Twentieth Century-Fox superstardom that was obviously on Darryl Zanuck’s mind (along with, it wouldn’t surprise anyone to hear, one of two other things). Though professionally speaking, Julie Kirgo notes in another of her well-researched Twilight Time essays, that he did make Monroe test for the part, a lesson that one wonders if he forgot when it came to Bella Darvi.

Knock was one five movies that marked Monroe’s 1952 output — along with two Fox comedies, a cameo in the opening segment of the studio’s all-star anthology O. Henry’s Full House and a loan-out to RKO for Clash by Night. Though the last was a drama, she didn’t have to carry large chunks of it, but in Knock, she has to bring off a case of frightening bonker-dom brought on by her lover’s death — an emotional condition that ends up threatening a child’s life.

It’s a somnambulant performance somewhere between effective and one she gets away with — though some will tell you that I’m underrating it, and possibly so. Call Monroe’s approach a second cousin, say, to Kim Novak’s deadpanned dialogue deliveries in Vertigo, though the passage of time has pretty well rendered Novak’s turn a complete success, no matter how she and Alfred Hitchcock got there. Monroe, of course, just got better as she aged, which more people should have told her at the time.”