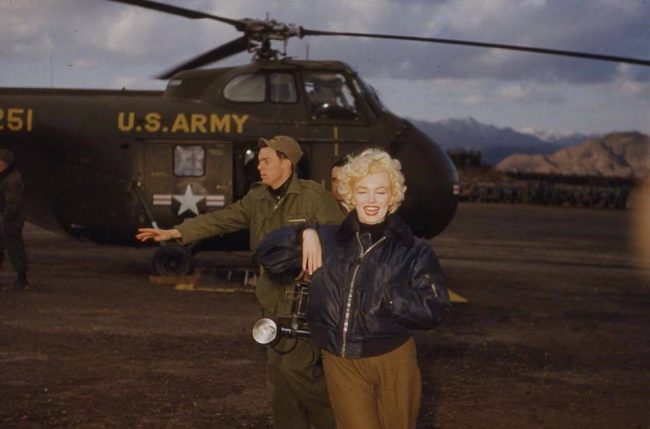 Eight colour slides of Marilyn in Korea were discovered by a veteran’s family in Louisiana over the Easter weekend, as Jim Dresbach writes for DCMilitary.com.

“When Louis Larue passed away in February, he left thousands of photographs he snapped of his family, friends, and time spent as an Army pilot in the 3rd Infantry Division in Korea.

Larue took hundreds of pictures during his Korean deployment. Some snapshots documented and captured the aftermath of an anti-aircraft artillery attack on his aircraft, but his lens stumbled upon glamour and greatness in early 1954. That February, Larue captured America’s most famous glamour girl on film.

Mike Larue, son of the Monroe photographer, has been busy trying to catch his breath and to piece together the circumstances behind the photos.

‘In all the conversations we had with my dad about him being over there (in Korea), nobody remembers him mentioning anything about seeing Marilyn Monroe,’ Mike said. ‘This came off as a shock.'”