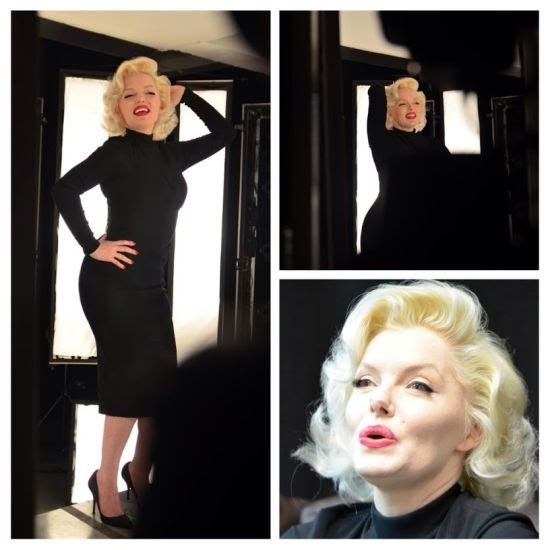 Monroe impersonator Suzie Kennedy has been transformed into an ‘avatar’ for a new film project, as Lauren Probert reports for The Sun.

“Suzie spent hours having her face and body scanned to produce a ‘digital double’ which will play the part of the troubled star in the movie. The project is the brainchild of London producer and writer Chris Ongaro. He teamed up with writer Kim Fuller, who penned the Spice Girls movie Spice World, produced by his brother Simon, the band’s manager.

To make the digital Marilyn, Suzie had more than 3,000 photos of her face and body taken, working with Amanda Darby, head of Pinewood 3D. She had to stand on a platform surrounded by 181 cameras snapping every inch of her. Markers were drawn on her face and another 60 cameras were used to pick up her facial expressions. She then had a motion capture session with Phil Stilgoe of Centroid, experts in the field, in which she moved about in a bodysuit with a helmet and camera attached to map all her movements.

Kim [Fuller] said: ‘Marilyn Monroe is a an iconic figure and we’re giving her a 21 century digital makeover. This is a very exciting project and it will be as much Marilyn as it is possible to be without her actually being there. As she’s digital, you can do anything. You have a lot of license dramatically. We want to do a movie which re-interprets her in a modern context and shows she is still relevant. She was a massive glamour star and was exploited. If she was around today, there would be a lot of #MeToo.’

The Marilyn Monroe project is in its early stages but there are already plans for films with celebrities who are long dead. Chris [Ongaro] said: ‘’There is very keen interest in Hollywood in the concept of bringing dead celebrities back to life. It’s an exciting time. Al Capone is next.'”