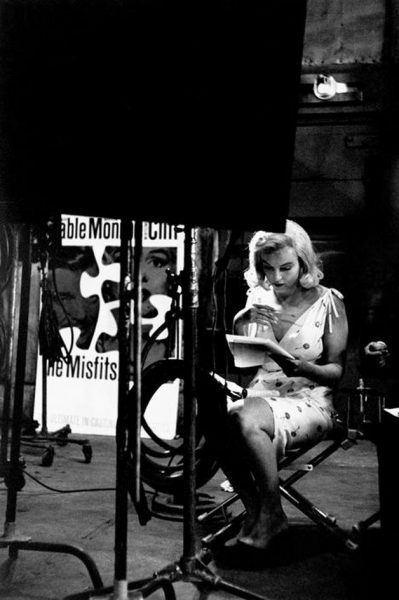 Carl Rollyson, author of Marilyn Monroe: A Life of the Actress, has set out his thoughts on Arthur Miller: Writer, the new documentary made by Miller’s daughter Rebecca, now on HBO in the US.

“It is a remarkable revelation of the man, but it is also a very limited view. How could it not be? It is his daughter’s film , and she could not, for example, bring herself to interview him about his institutionalized Down’s syndrome son. The film is really a memoir, and not a biography.

But I am going to concentrate on the treatment of Marilyn Monroe. For the most part, she is treated as rather pitiful, with Miller spending his time propping her up. He wrote very little while married to her but does not mention the countless hours locked away in a room trying to write. More importantly, he gives a very distorted view of what happened during the shooting of The Misfits. He says she doubted she could perform in a serious role. This is a staggering lie, or an example of self-delusion. Monroe was upset about the script and was shut out from the Miller-Huston deliberations about how to fix it. She wasn’t happy that her husband was treating her as a myth, not a real person. If he was going to give her lines that she actually had spoken, then he was obligated to give the full context in which such lines were spoken.

The most telling moment occurs earlier when Miller mentions Elia Kazan as telling him what a great play Death of a Salesman was. Kazan may have been the first one to say so to Miller. Miller trusted Kazan’s judgment and his sincerity. But when it comes to The Misfits, Miller does not mention the letter [Elia] Kazan sent him detailing the faults with the character of Roslyn that Monroe had to play. And those faults were exactly the ones Monroe had identified.

Another telling moment in the film is when Tony Kushner analyzes After the Fall and says Miller was afraid of Monroe. Just so, she had a much more capacious sensibility than he did, and he did not know how to respond to her. The same is true with Ted Hughes and Sylvia Plath. When she died, Hughes said, ‘It was her or me.’ In both cases, these men simply could not come up to the level of their wives, and afterwards suggested that was because the wives were doomed. And that is the impression Miller conveys in his daughter’s film.”