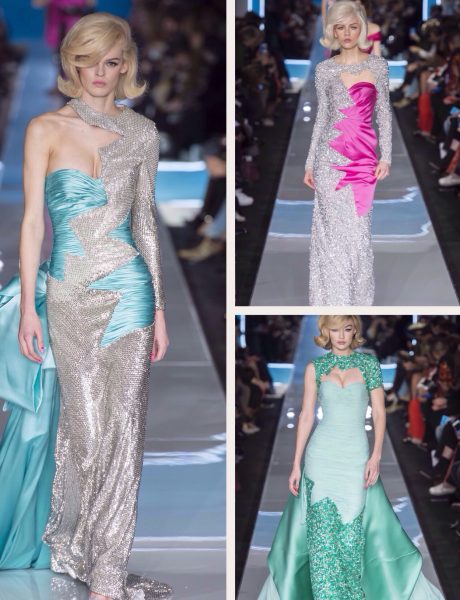 Designer Jeremy Scott has always been fascinated by pop culture. In his fall 2018 ready-to-wear collection for Moschino, unveiled yesterday at Milan Fashion Week, he draws on the many myths about Marilyn and the Kennedys, adding his own farcical spin that Jackie Kennedy was really an alien, and the killer of both Marilyn and JFK. It’s fun to imagine what Marilyn would have worn in the 1960s – she was very fond of Pucci – and Scott’s designs are a sort of postmodern blend of the Space Age and Pop Art. In terms of his Marilyn-esque designs (as modelled here by Bella Hadid), I think the evening gowns work best. But although the concept is meant to be humorous, I do wish Scott had bypassed these tired old tropes which tend to turn Marilyn into what she most feared becoming (a joke.)