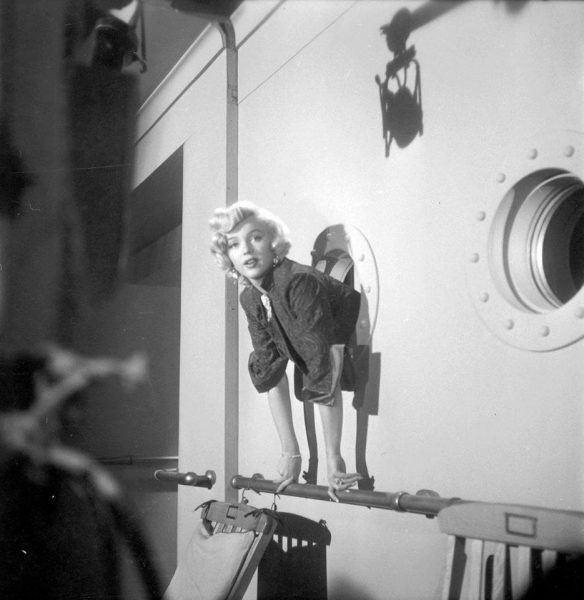 The cruise liner which once conveyed Lorelei Lee to Paris is referenced in a major new exhibition, Ocean Liners: Speed and Style, at the V&A until June. “We can’t talk about these great ships without a trip to the movies, showing how this age has inspired Hollywood,” Tabish Khan writes in his review for Londonist, citing the memorable scene where “Marilyn Monroe clambers out of a porthole in Gentlemen Prefer Blondes…”

Of course, Blondes was filmed on dry land – the Fox lot in Hollywood, in fact. In a 2017 post over at the History Scout blog, A.J. Jelonek explored the nautical aspects of Blondes and its lesser-known 1955 sequel, Gentlemen Marry Brunettes (in which Jane Russell returned as Dorothy, minus Marilyn.)

“Gentlemen Prefer Blondes mostly takes place on an ocean liner crossing the Atlantic. In the 1920s book which the movie is based off of, their ship is the RMS Majestic. By the 1950’s, the Majestic was long gone. Although all the scenes were filmed on sound stages, a ship still had to be cast as the ‘only way to cross.’ Which one would they choose? Depends where you stop the movie.

The first ship you see is a model of the RMS Queen Mary, but look closely. The ship is outfitted with the Mary’s name, stacks, vents, and other details. But her body is unmistakably the RMS Titanic. It’s a nice money-saving idea to reuse a model, and creates a very … interesting ship.

When they dock in France, the following shot is briefly shown … The SS Conte di Savoia, back from the grave?! This ocean liner was bombed in 1943 and sank in shallow waters. In 1945, her burned hull was raised in the hopes of restoring her to some sailing use. When repairs were deemed too costly, she was scrapped in 1950 (source). How is she here then? Probably some stock footage from the late 30’s/early 40’s was used. Still, weird.

In the next shot, the movie fades to a black-topped smokestack whistling its steam horns. Didn’t we just see the funnels were red on top?? Later, when the the ladies sail back to the States, a shot of the RMS Titan Mary appears again. These shots are shown very briefly and [mostly] spaced far apart from each other, which helps to overlook their inconsistencies while watching the movie.”