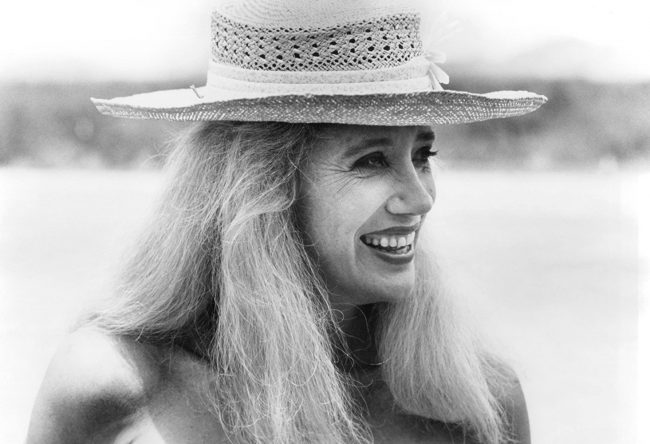 Actress Sally Kirkland began her career just after Marilyn died, in 1963. She played small roles in some notable films, including The Sting, The Way We Were, A Star Is Born and Private Benjamin, before earning an Oscar nomination for Anna (1987.) She later played Marilyn in The Island, a 1998 comedy which imagines a young man finding Monroe and John F. Kennedy still alive and well on a desert island (which sounds rather like a bizarre sequel to Something’s Got to Give.)

Now 76, Sally has unforunately suffered a head injury after falling during a radio appearance, and is now in hospital undergoing surgery but is expected to make a full recovery. In a 2016 interview with Jeff Cramer for his Stone Cold Crazy blog, she revealed that Marilyn had been an important influence on her career. (The story that Shelley Winters told Sally about Marilyn’s ‘fuck-me shoes’ should probably taken with a large pinch of salt, as Shelley was prone to exaggerate. As far as I know, the phrase was popularised during the 1990s.)

“I stopped being shy sometime in the early ’60s,with what’s called ‘the private moments’ at the Actors Studio where I do my imitation of Marilyn Monroe on the calendar. I would find some way to take my clothes off in a private moment, and with Lee Strasberg’s support. Pretty soon, everybody in the Actors Studio was waiting for me to take my clothes off.

I was obsessed with Marilyn Monroe and also at 18 I had met Shelley Winters who took me under her wing, adopted me. She had lived with Marilyn. So she gave me Marilyn’s shoes that were open toe, open back and they were called ‘Fuck Me Shoes’ according to Shelley. Marilyn’s Fuck Me Shoes. I wore them everywhere. I wore them absolutely everywhere and that gave me the power of being Marilyn Monroe. It also gave me the power to take off all my clothes.”