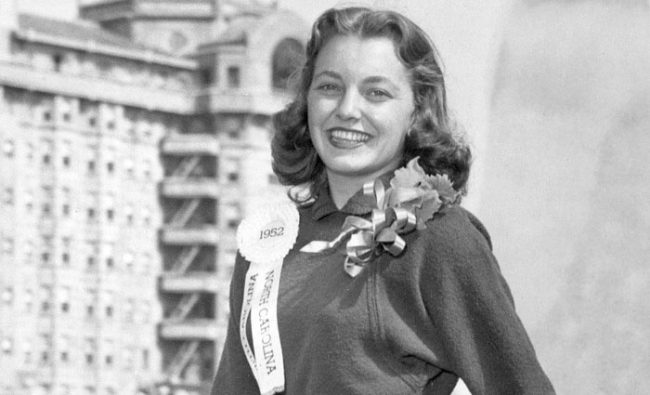 In the Salisbury Post, Mark Wineka notes the passing of Barbara Harris Richmond, who was crowned Miss North Carolina in 1952 and attended the Miss America pageant in Atlantic City, where she met the parade’s Grand Marshal, Marilyn Monroe. (There are several photos of Marilyn with various contestants, but as yet I haven’t seen Barbara’s. Incidentally, Salisbury was also the home-town of Marilyn’s future masseur and close friend, Ralph Roberts.)

“In June of that year, only after a lot of coaxing and having just graduated from Woman’s College in Greensboro, 22-year-old Barbara Harris entered the Jaycee-sponsored Miss Salisbury Pageant and won. She topped a field of 16 contestants.

By late July, she was competing in the Miss North Carolina Pageant in Winston-Salem. She won again, as judges selected her over 37 other contestants. All the stories to come would mention how small she was for a beauty queen — 5 feet, 2 inches tall and 115 pounds.

It also was standard for the day to give her measurements, which were 34-24-34.

A hectic month followed leading up to the Miss America competition in Atlantic City, New Jersey. She toured New York and went through hours of coaching and singing rehearsals for the pageant, which included the usual bathing suit, evening gown and talent categories.

During the week, Barbara had her picture taken with the parade marshal, Marilyn Monroe. It was a tossup as to who was prettier, though Monroe raised eyebrows with a dress whose neckline plunged to her waist.

The Salisbury Evening Post sent a reporter to cover all of Barbara’s pageant activities. Editors assumed readers were so familiar with her by then that headlines sometimes referred to her as ‘Babs.’

Though Barbara didn’t make the final 10 in the 1952 Miss America Pageant, she was mentioned prominently for the Grand Talent Award. She filled the Atlantic City convention hall with an aria from ‘Samson and Delilah,’ prompting a rousing ovation from the crowd of 18,000.”