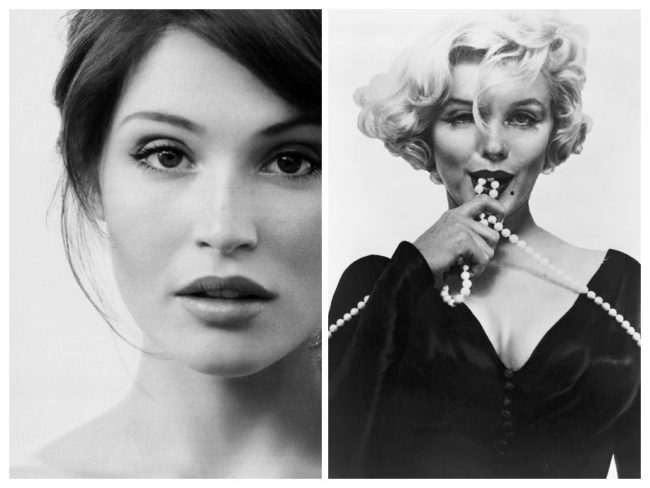 British actress Gemma Arterton has revealed that she is playing Marilyn in It’s Me, Sugar, a new TV film about the making of Some Like It Hot, in a recent interview for the French movie website, Allocine (I have used Google Translate, so please forgive any typos!) Very little is known about It’s Me, Sugar as yet, except that the director is Sean Foley (Mindhorn.) Personally, I like Gemma as an actress, but I would have thought the ‘behind the scenes’ angle on Marilyn’s life had already been covered in My Week With Marilyn.

The title is supposedly based on a line that Marilyn blew multiple times on the set, but the line was actually ‘Where’s that bourbon.’ The situation was also more complicated than is generally perceived, as biographer Donald Wolfe (who watched the scene being filmed) believed that Marilyn was not merely flubbing the line, but was trying to persuade director Billy Wilder to let her play the scene differently.

“It’s a strong role in which you have to cry, to be in a state of almost permanent sadness. It must not be obvious …

Yes, in fact, everything depends on the role. For example, last week I played Marilyn Monroe in a TV movie, a comedy. There was a scene in which I had to cry and I could not, because it was a comedy. I was in this madness all the time.

Can you tell us more about this project you were talking about in which you play Marilyn Monroe?

It’s called It’s Me, Sugar. It’s about the movie Some Like It Hot. Marilyn Monroe was in a really troubled period of her life. She took a lot of drugs, drank a lot. She was the biggest star in the world, she had a lot of attention on her, a lot of pressure. She is great in the movie. But there is a scene, when she comes to the door, she says, ‘It’s me, Sugar.’ It took 47 shots to make this scene. The film is about that moment, the crisis she had. It’s funny because it’s stupid not to be able to say ‘It’s me, Sugar’. She said all the variations. It’s tragic too.

It’s a film period that I love. Billy Wilder is one of my favorite directors. I have always had a fascination for Marilyn Monroe. The director is Sean Foley. He does mostly theater, comedy usually. But he made a film last year called Mindhorn, which was a bizarre English comedy. He was a comedian before. I find that directors who have done comedy before do better. It’s hard to do a good comedy, because it takes rhythm. It’s really difficult.”

Thanks to MM Fan Club Belgium