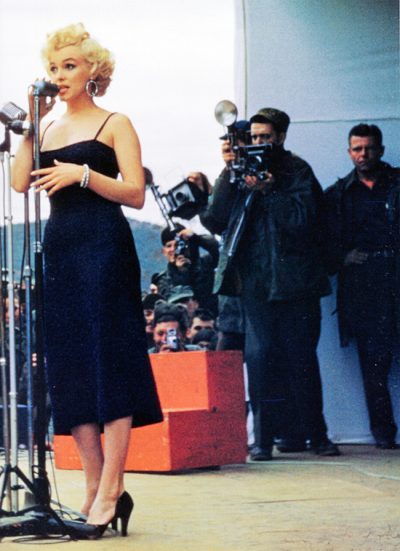 Country singer Leroy Van Dyke, whose career spans six decades, has recalled being Marilyn’s opening act during her 1954 tour of Korea in an interview with Maine Edge.

“During the Korean War, Van Dyke was a special agent in U.S. Army Counterintelligence – a member of the 40th CIC, attached to the 40th infantry division. Assigned at Regimental level on the DMZ on the 38th parallel, Van Dyke says he had a squad tent to himself, and on occasion, he would head in to detachment for meetings accompanied by his guitar.

‘My commanding officer was a major from Kansas City and we got along real well,’ Van Dyke said. ‘He’d say Van, go get your guitar and let’s have a little music. The first time anyone heard The Auctioneer was at one of those meetings. Word quickly began to spread among the troops about the singing special agent.’

‘Later on, the Asst. Regimental Commander – a Lt. Colonel – came into my tent and asked if I would perform for 15 minutes to open up a USO show that was coming through,’ Van Dyke recalled. “’ asked him who else was going to perform on this show and he told me. It was Marilyn Monroe.’

More than a little nervous at the prospect of trying to appease impatient troops awaiting the hottest female star in the world at that moment, Van Dyke recalled his response: ‘You’ve got to be kidding me,’ before adding ‘It worked out very well and I guess I’m the only country act to ever open a show for Marilyn Monroe.'”