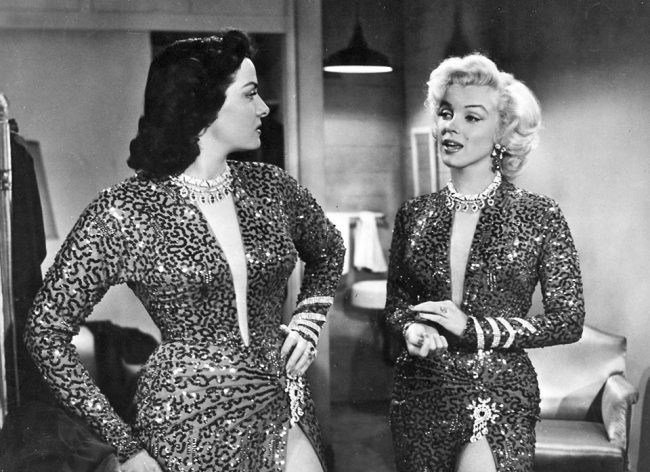 Alicia Malone is the  Australian-born author of Backwards in Heels:  The Past, Present and Future of Women Working in Film. She is also a host at Filmstruck, a US-only streaming service run by the Criterion Collection (who released a special edition of The Asphalt Jungle in 2016.) In an interview with Broadway World, Alicia talks about her favourite classic movies – and Marilyn.

“When you were watching these films as a child, which quotable lines did you try reciting?

I am the worst at doing impressions and accents, but it doesn’t stop me from trying! Because of my love of Marilyn Monroe, Gentlemen Prefer Blondes was a favorite film of mine. I used to try both Marilyn, ‘Thank you ever so!’ and Jane Russell. For Jane, I’d convince my sister to say, ‘You’ll find that I mean business!’ just so I could retort in my best Jane Russell voice, ‘Oh, really? Then why are you wearing that hat!’ I’m sure it was quite annoying to everyone involved.

If you were a grown-up and a working host when you saw some of your classic films as a child, who would you have wanted to interview and what would your lead question have been?

This is a great question! I know I’ve mentioned Marilyn Monroe a lot, but she really did fascinate me, so I’ll pick her. As I said, I loved her glam persona, but when I started reading books about her, I was shocked at how tough her life was, and how at odds that was with who she seemed on screen. It breaks my heart that she just wanted to be taken seriously as an actress, but was constantly placed as the ditzy blonde. So I would have loved to interview Marilyn, get a sense of what she was really like under that whispered voice and platinum blonde hair… and I would have asked her which role she really wanted to play.”