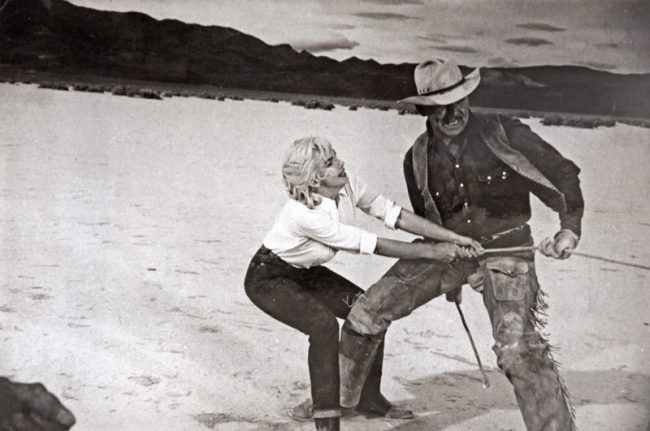 The threat to America’s wild horses – a major theme in The Misfits – has returned with a vengeance, as Susan Wagner, head of the non-profit organisation, Equine Advocates, reports for the New York Daily News.

“Back in the 1950s, wild horses were at the brink of extinction. They had no federal protections. People known as Mustangers were chasing, rounding up and selling them for slaughter by the thousands. Anyone who has seen the classic 1961 Clark Gable and Marilyn Monroe film The Misfits has a sense — albeit a sanitized, Hollywood sense — of this dirty work.

The biggest threat to wild horses today is a group of ranchers — known as ‘welfare ranchers’ — who use federal lands to graze their cattle. They have made it clear that they want the horses and burros gone. They believe they are entitled to the land and water rights for their livestock.

There is no doubt that our wild horses and burros can be managed humanely, but that is not what is going on. Nearly 50,000 healthy animals are now being held captive in Bureau of Land Management holding facilities. Many suffer and die horrible deaths during the roundups, which are cruel and unnecessary.

In July, the House Appropriations Committee narrowly voted to adopt language, in the 2018 budget, known as the Stewart Amendment, allowing for the sale of wild horses and burros ‘without limitation,’ which means slaughter.

No equine has been legally slaughtered in the United States since 2007. According to polls, most Americans are strongly opposed to horse slaughter.

But if lawmakers controlled by special interests have their way, those 50,000 captive wild horses and burros could meet that fate in Mexico, Canada or by returning horse slaughter to U.S. soil.”