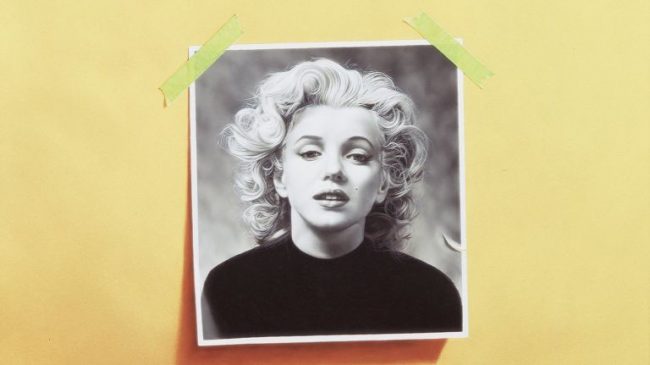 ‘Golden Marilyn’, a hyper-realist portrait of Marilyn created in 2010 by the Tulsa-based artist Otto Duecker (after the iconic Ben Ross photo), is featured in Fool the Eye, a new exhibition at the Nassau County Museum of Art in Roslyn Arbor, New York until March 2018, as Deidre Geben reports for Newsday.

“At a time when the word ‘fake’ is dominating conversation, the Nassau County Museum of Art presents ‘Fool the Eye,’ an ambitious examination of truth and illusion comprising more than 150 paintings, sculptures and works on paper from the past two centuries.

‘Whether realist or abstract, all the works in the show play with perceptual effects,’ says Franklin Hill Perrell, who, along with Debbie Wells, guest-curated the exhibition. To be sure, Perrell and Wells have gathered a delightfully mixed bag of visual tricks. Prominent among the optical devices on view is trompe l’oeil, a technique that upends rules of linear perspective to convince viewers they are looking at actual objects instead of two-dimensional representations of them.

Museumgoers are likely to be tempted to peel off the pieces of torn and curling tape seeming to secure Otto Duecker’s black-and-white photographic rendering of Marilyn Monroe to a wall — that is, until they realize it’s all a pictorial ruse.”