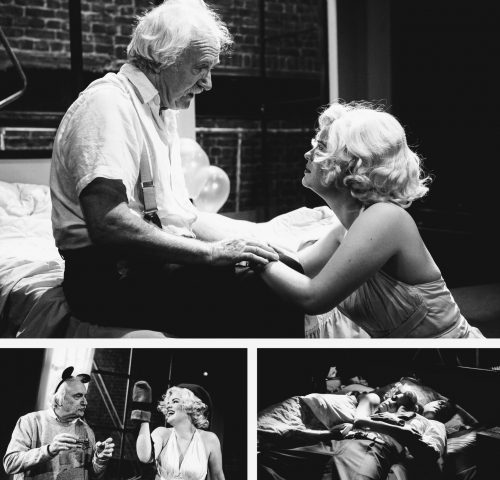 The first London revival of Terry Johnson’s Insignificance in 25 years has just opened at the Arcola Theatre, running through to November 18. Here’s a selection of quotes from the first-night reviews:

“The case for a revival of Terry Johnson’s flight of fancy on the nature of fame is clear. More so than in 1982, when Insignificance was written, the worlds of celebrity and politics have elided. Fame is political, and the most powerful politicians are the ones with the most followers.

That’s not to say that David Mercatali’s revival is a big, hammer-you-over-the-head Trump metaphor. Its significance is more subtle than that: everyone’s a bit scared and messed up, whether you’re Albert Einstein, Marilyn Monroe or just some random on the street.” – The Stage

“Alice Bailey Johnson is super as Marilyn, intellectually hungry, frustrated as an artist and a woman, the carapace of confidence cracking to show the fragile self-esteem as her voice goes from the sexualised Little Bo-Peep tones to that of a woman trying to make her way in a man’s world under the most male of male gazes. That element of the play shouldn’t be relevant 60 years on from the time in which it is set and 35 years on from its writing – alas, of course, it very much is.” – Broadway World

“Monroe becomes the centre of David Mercatali’s production, lending it a feminist bent, and Alice Bailey Johnson (daughter of the playwright) artfully suggests the way she slips into a constructed identity with coy shoulder-shimmies and flirtatious raised eyebrows. Her legacy, perhaps, is to leave an imprint on her gender – still out-influenced 60 years on.

Mercatali’s production never finds the requisite slipperiness. Since Max Dorey’s suite is so flimsy and fake – its walls wobbling with every knock on the door, its window looking out onto the Arcola’s brick wall – we’re never allowed to forget that this is a fiction being performed. That brings the impersonations into view, instead of the personalities, only serving to up our scepticism. Johnson’s play needs the opposite: a way of persuading us of its possibility until we submit to a fantasy that’s too tantalising to resist. Without that wooziness, it seems strangely flat – a stage show, little more – and so loses the lightness this fancy needs to take flight.” – What’s Onstage

“Alice Bailey Johnson expertly captures the essence of Marilyn – her breathy voice, her star quality and her aspiration to be taken seriously, while Simon Rouse is spectacular as the awkward academic, who is baffled yet intrigued to find the movie goddess bursting into his bedroom in the middle of the night. The discussion about the theory of relativity between an eager-to-learn Monroe and a naturally nurturing Einstein is surprisingly joyful. At the heart of the tale is Einstein and Marilyn’s unlikely but believable friendship. Although the setting is fictitious, all audience members will know the four main characters to some degree.

Oliver Hembrough projects DiMaggio’s despair and frustration convincingly, and the way the couple steer Einstein into the role of marriage counsellor adds humour to the sense of desperation. Tom Mannion as the threatening senator Joseph McCarthy is suitably dastardly, especially in his dealings with Monroe. As he manhandles and humiliates the actress who seems unsure of how to respond, it’s shameful to acknowledge that over 60 years later, this behaviour is alive and well in Hollywood.” – Camden New Journal

“This is a play that embraces its surrealism with wanton abandon. Veering between tacky pastiche and weighty meditation – and sometimes both at once – it is something of a curious curate’s egg. The main question that persists is ‘why?’ Why are we being told this tale? The narrative itself seems unsure as to what it is, and this only leads to uncertainty. To borrow from the title, it would be too pejorative and damning to call Insignificance ‘insignificant’, but it stops short of being substantial. It is, however, visually arresting and interspersed with a number of witty, sharp quips to garner a hearty chuckle or three.” – Islington Gazette

“There’s more to Insignificance than a simple rumination on fame and its impact, and it’s these other themes – marital alienation, the intellectual stymieing of women, and yes, the insignificance of celebrity in the face of personal anguish – that this successful production draws out.

Fully deserving of her recent nomination for Best Female by stage awards The Offies, Alice Bailey Johnson initially plays Marilyn with speedily unwinding energy … adding in notes of cold anger when she feels like she’s being patronised and scalding sexuality when she reaches the theory’s climax.

All four main actors are excellent at bouncing off each other and maintaining their distinctive characters through Insignificance‘s many threads, spelling out the misfiring interpersonal dynamics between them with real emotion.” – Hackney Citizen