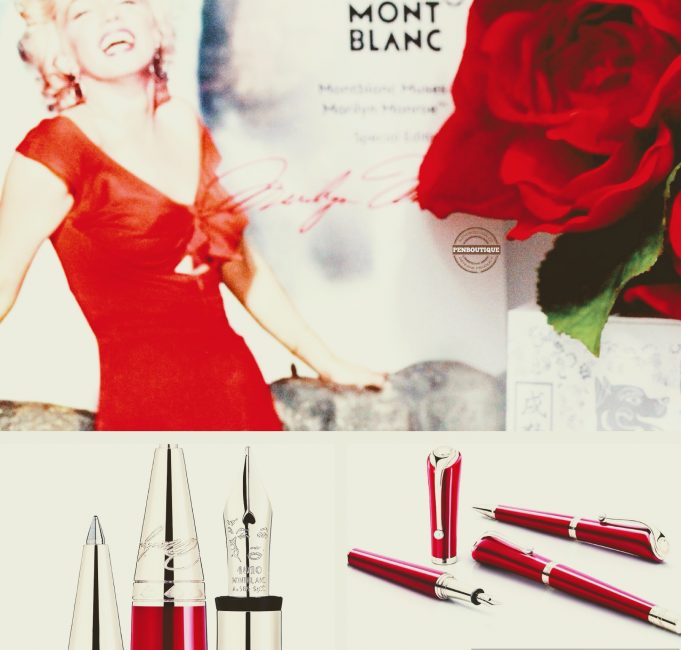 If you’re a wealthy scribe – sadly, most of us aren’t – and you’re looking for a luxury item this Christmas, these new Marilyn-themed pens (priced at £500 upwards) from Montblanc Muses may be for you, as Nancy Olsen reports for Forbes.

“This pen is the first in the Muses Edition to be rendered—cap and barrel—in lipstick red. The rich and sensual tone is beautifully paired with champagne-tone gold-coated fittings that fan the flame of color rather than cool it down. The shape of the pen is inspired by the four-inch heels Monroe wore so well, and the slanted cap top of the pen is decorated with the Montblanc emblem, also coated in champagne-tone gold.

If you’re old movie-star buff, as I am, you know that Monroe, who was born in 1926, was married to American Major League Baseball player Joe DiMaggio, though their marriage lasted a mere 274 days. But that apparently allowed him time enough to buy her, among other things, a single row of Akoya pearls, which she was often seen wearing. Thus the pen’s clip is set with a single pearl as a romantic reference to the couple’s short-but-sweet love affair.

‘Diamonds Are A Girl’s Best Friend,’ Monroe’s song sensation from the film, Gentlemen Prefer Blondes, earned the actress additional kudos for her charming delivery, so the cone of the Special Edition writing instrument is engraved with diamond shapes alongside her engraved signature. The 14-karat gold fountain pen nib is coated in champagne-tone gold, and it is decorated with an engraved portrait of the actress. The traditional (and necessary) rounded hole in the nib, often called the ‘heart’ of the nib, is in this instance actually shaped as a heart adding a very feminine touch to the overall appearance of the pen. The collection also includes a rollerball pen and a ballpoint.”