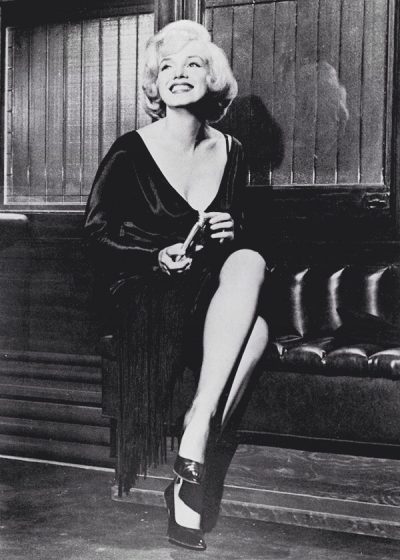 Almost 60 years after its release, Some Like It Hot has topped a BBC Culture poll of the 100 Greatest Comedy Films. (Gentlemen Prefer Blondes also made the list, at No. 87.) Nicholas Barber has an insightful take on  the enduring appeal of Billy Wilder’s classic farce…

“It is structured so meticulously that it glides from moment to moment with the elegance of an Olympic figure skater, and the consummate screwball dialogue, by Wilder and IAL Diamond, is so polished that every line includes either a joke, a double meaning, or an allusion to a line elsewhere in the film. To quote one character, it’s a riot of ‘spills, thrills, laughs and games’. To quote another, it deserves to be ‘the biggest thing since the Graf Zeppelin’. So why was it chosen as the best comedy ever made? Simple. What else were we going to choose?

There’s more to Some Like It Hot than its sparkling surface, though. As well as being a romantic comedy, a buddy movie, a crime caper, and a musical, the film is an anthem in praise of tolerance, acceptance, and the possibility of transformation. It’s an anthem that we need to hear now more than ever.

One of the film’s many twists is that when Sugar meets Junior on the beach, he doesn’t throw himself at her. He plays hard to get. Sugar tells him that her band specialises in hot jazz, but he sniffs, ‘Well, I guess some like it hot. But personally, I prefer classical music.’ Sugar doesn’t miss a beat. She claims to have ‘spent three years at the Sheboygan Conservatory of Music’ – a claim she overheard Joe/Josephine making the previous night. ‘Good school,’ murmurs Joe/Junior. Sugar, he realises, is just as adept at lying as he is.

In summary, Some Like It Hot is the story of people who lie and cheat in order to con other people into bed or out of their cash. Wilder has a reputation for dark, cynical films (see also Sunset Boulevard and Double Indemnity), and Some Like It Hot could be categorised as one of them. But it has so much warmth that it carries the viewer upwards like a hot-air balloon. Rather than condemning its unscrupulous anti-heroes, it respects them and sympathises with them in a way which must have seemed radical in 1959, and which seems more radical nearly six decades later.

Just imagine how the film’s scenario would be treated in a Hollywood comedy today. Joe and Jerry would be punished for their deceit. Sugar would have to catch Joe out, and he would have to apologise, and the viewer would have to sit through a montage of their shared misery before she forgave him …

Some Like It Hot is too buoyant to be brought down to earth by such prissiness. When Sugar learns that Joe has been tricking her, she runs straight into his arms. When Osgood learns that Jerry has been tricking him, he doesn’t bat an eyelid. The message is that there is nothing wrong with faking it until you make it. Experimenting with a new identity can help you become a better, happier person. It can help you survive. And, if you’re lucky, you’ll find someone who accepts you for whomever you want to be – perfect or otherwise.

It’s a boldly inclusive message, but it’s one that must have been close to the film-makers’ hearts. After all, several of them had reinvented themselves, just as the characters do: emigrating from Germany (in Wilder’s case) and Romania (in Diamond’s), distancing themselves from their hardscrabble pasts in Californian foster homes (in Monroe’s case) and on the streets of the Bronx (in Curtis’s). For a frantic farce about two cross-dressers on the run from prohibition-era mobsters, Some Like It Hot is a strikingly personal, even semi-autobiographical film.”