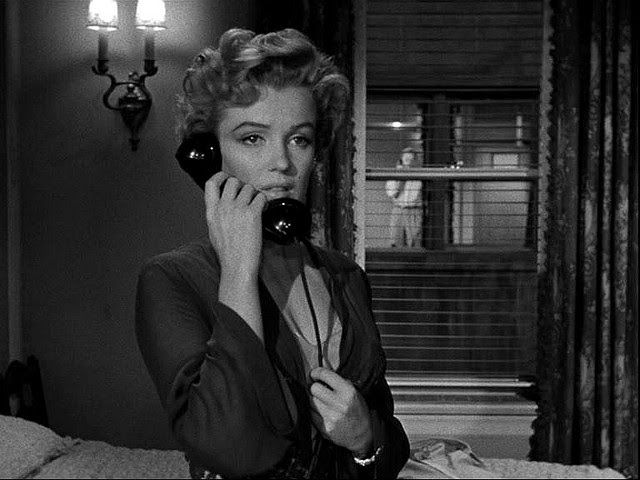 FIlmed while she was on the cusp of stardom, Don’t Bother to Knock gave Marilyn one of her most important, yet least-known rones. Over at Birth Movies Death today, Kalyn Corrigan takes a closer look at this remarkable performance.

“For a girl who gained fame as a stunningly photogenic sex symbol, working her dumb blonde persona to her advantage, it’s fascinating to see Monroe play someone who’s so irrevocably cracked. Best known as the steamy naïve seductress in films like Gentlemen Prefer Blondes, How to Marry a Millionaire, The Seven Year Itch, and this writer’s personal favorite, Some Like It Hot, it’s a graceful and gratifying pivot to see Marilyn take on the role of a damsel come undone. Jed tells Nell at one point in the film that she’s ‘silk on one side and sandpaper on the other’, and the description couldn’t be more fitting to Monroe’s performance. As she flutters back and forth between the shy, sweet girl who did everything in truth, to the manipulatively maniacal beauty queen with a screw loose, we really get to see a taste of Monroe’s range, and it’s an invigorating break from the normal romantic comedy routine. Norma Jeane was undoubtedly beautiful, but she was also an actor, and it’s cool to see her given a chance to show off her skills in a rare, multi-layered role for women in cinema in the 1950s.”