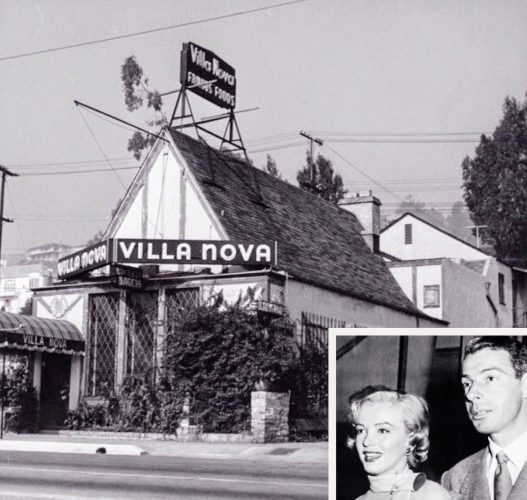 “Born on June 24, 1924, in Duluth, Minn., Charlotte Dale’s family moved to Beverly Hills in the 1930s. Graduating from UCLA in 1946, Dale worked for a time at the William Morris Talent Agency and was a personal assistant to ‘F Troop’ star Forrest Tucker..

In 1948 she married Allen Dale, who had changed his name from Carlo Alfredo Di-Lisio when he came from Italy to Hollywood in the 1920s, finding work as an actor and stuntman. He opened the Villa Nova Trattoria on Hollywood and Vine in 1933 with financial backers Charlie Chaplin and Vincente Minnelli.

According to Alison Martino’s Vintage Los Angeles website, that’s where the couple met. After marrying, they ran the restaurant together, which moved several times before settling on the Sunset Strip in 1944. The site is now the location of the Rainbow Bar and Grill, a rock star hangout. The site has an interesting article about Dale’s visit to the Rainbow when she was 90.

Villa Nova was frequented by Hollywood’s elite on the Sunset Strip. Legend has it, it’s where Marilyn Monroe had her first date with Joe DiMaggio and Minnelli proposed to Judy Garland.”