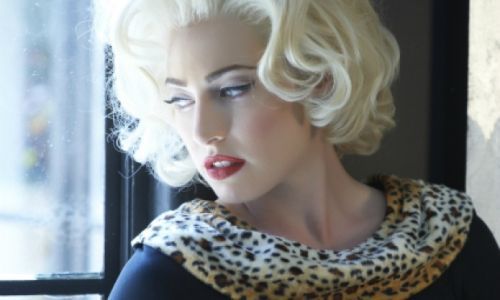 Actress Charlotte Sullivan looks back on her role as Marilyn in the 2011 TV mini-series, The Kennedys, in an interview for Monsters and Critics. The show received mixed reviews – I thought Charlotte did her best with a poorly-written character – and her comments reveal the challenges of playing someone as iconic as Marilyn.

“I played a drug addict for my husband in this one film, and it took me five minutes to get ready. But Marilyn Monroe took like two and a half hours! The whole team of people who put me together for that…they are just the most insanely talented people.

Also, the thing with the Marilyn look was it’s such a contrived beauty, which is actually what I love about it. This is something like what Dita von Teese does. I love her so much, she believes everybody can be glamorous.

But playing Marilyn…I got a lot of flack for that. I got a lot of hate for that. It’s a poisoned chalice. First of all, the opportunity to play that kind of character is a once-in-a-lifetime type of thing. Especially being surrounded by such a cast, it was a spectacular opportunity.

I knew going into it I would be eviscerated because there are so many people obsessed with her, in love with her, and I can’t live up to that. You just have to be confident. I think the thing with me during that particular time in my life was I didn’t have any confidence. I kind of harness that because Marilyn didn’t have any either.

What do I have in common with this woman? I know that she desperately wanted to be thought of as a good actress, and that’s something I have always wanted – to be great at what I do. I struggled, there have been times I feel good about my work then I lose it. It’s a really strange art form.”