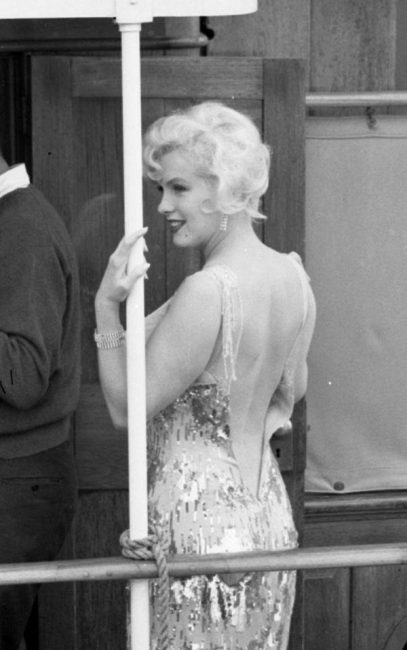 The original Guardian review of Some Like It Hot – first published when it was released in the UK exactly fifty- eight years ago, on May 16, 1959 – is reposted today. The unnamed critic describes it as “a funny film with an odd flavour of humour,” reflecting director Billy Wilder’s acerbic style, and how provocative this comedy classic was for its time.

“Mr Wilder, whose films are successful and frequent, may have found that the flouting of our nicer susceptibilities is just what most of us want. Be that as it may, Some Like it Hot is a bit uncomfortable. Not that there is anything downright offensive … it is only that the vulgarity is a bit insistent – and persistent.

The women’s band includes Marilyn Monroe, even sweeter, more pathetic and, possibly, more Monroe-like than ever in her attire … Miss Monroe, as always, is irresistible, even when, as in this instance, she is being ruthlessly presented as a caricature of herself – another example of the Wilder touch.” 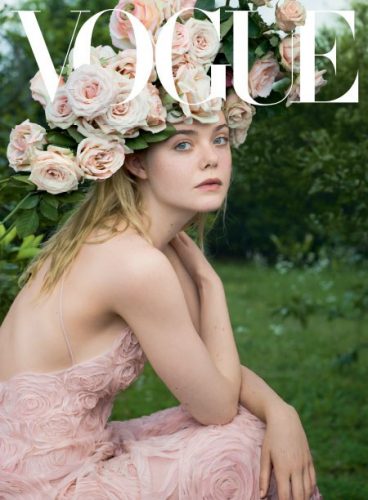 At 19, Elle Fanning is one of Hollywood’s most acclaimed young actresses – and although she hasn’t yet followed the well-trodden route of posing for a Marilyn-inspired photo shoot, she has never made a secret of her love for MM. In a new cover story for Vogue, Elle reveals how studying Marilyn’s life – both on and off the screen – has influenced her own career.

“Marilyn Monroe has been Fanning’s hero for about fifteen years—most of her life. She studies Marilyn’s interviews the way some study paintings by Cézanne. ‘You could always see the emotions that she was feeling . . . in her eyes,’ she says. ‘She didn’t know how great she was.’

She often wonders how Marilyn would have managed social media. For years, Fanning resisted what she calls (in excellent old-lady fashion) ‘the Facebook and the Twitter.’ But as time went on she worried she was too much in her shell. ‘I need to evolve with the times!’ she says.”

Actress Charlotte Sullivan looks back on her role as Marilyn in the 2011 TV mini-series, The Kennedys, in an interview for Monsters and Critics. The show received mixed reviews – I thought Charlotte did her best with a poorly-written character – and her comments reveal the challenges of playing someone as iconic as Marilyn.

“I played a drug addict for my husband in this one film, and it took me five minutes to get ready. But Marilyn Monroe took like two and a half hours! The whole team of people who put me together for that…they are just the most insanely talented people.

Also, the thing with the Marilyn look was it’s such a contrived beauty, which is actually what I love about it. This is something like what Dita von Teese does. I love her so much, she believes everybody can be glamorous.

But playing Marilyn…I got a lot of flack for that. I got a lot of hate for that. It’s a poisoned chalice. First of all, the opportunity to play that kind of character is a once-in-a-lifetime type of thing. Especially being surrounded by such a cast, it was a spectacular opportunity.

I knew going into it I would be eviscerated because there are so many people obsessed with her, in love with her, and I can’t live up to that. You just have to be confident. I think the thing with me during that particular time in my life was I didn’t have any confidence. I kind of harness that because Marilyn didn’t have any either.

What do I have in common with this woman? I know that she desperately wanted to be thought of as a good actress, and that’s something I have always wanted – to be great at what I do. I struggled, there have been times I feel good about my work then I lose it. It’s a really strange art form.” 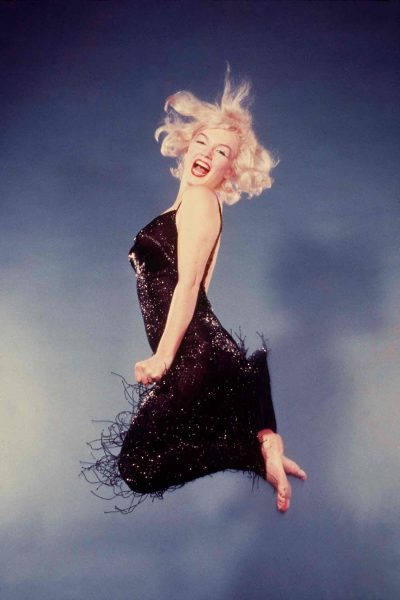 Philippe Halsman’s joyous 1959 portrait of Marilyn – part of his ‘Jump’ series – is one of seventy images chosen to represent Magnum Photos on its 70th anniversary in an exhibition in the  pedestrian tunnel at King’s Cross in London for a month from May 15, reports The Guardian.

Over at Atlas Obscura, Eve Kahn explores the darker side of celebrity memorabilia, and the market for medical items such as pillboxes, prescriptions and X-Rays of stars like Marilyn who died in unusual circumstances.

“Scott Fortner, a major buyer and scholar of Marilyn Monroe’s former possessions who loans widely to museums, owns bottles for her prescription eye drops and anti-allergy pills. He has bought related paperwork, too … Because of his focus on objects that she owned, he says, he is not much interested in medical records such as her chest x-rays that hospital staff may have taken home. And he would firmly draw the line against acquiring anything invasive, prurient and morbid …

Fortner points out that there is plenty of other illuminating and emotionally powerful material to collect instead, which she would have wanted her fans to know about. Throughout her tumultuous career, while shedding husbands and movie personas again and again, she somehow remembered to preserve her own memorabilia down to the drugstore receipts and eyedroppers. ‘She saved everything,’ Fortner says. ‘She didn’t throw anything away.'”