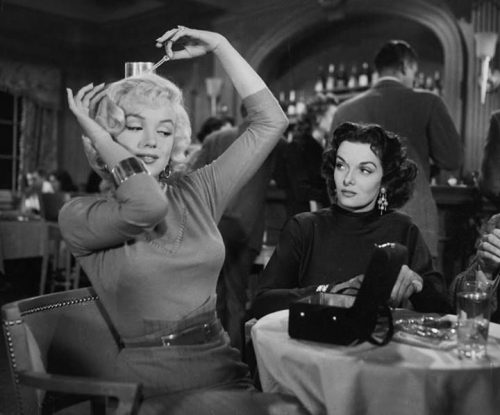 Blogger Caroline Colvin takes a closer look at Gentlemen Prefer Blondes in her RomCom of the Week series, arguing that its portrayal of female sexuality is far more progressive than early critics realised.

“When the film first came out, critics berated Lorelei and Dorothy (and by extension, Monroe and Russell) for their sexual confidence. Their forwardness, by modern standards, however, is considered praiseworthy. It’s two sides of the same coin: either the women’s sexiness makes them solely objects for male consumption or their fearless sex appeal is a mark of empowerment, making them subjects, autonomous, active players in their own adult lives.

Are Dorothy and Lorelei villains of female sexuality, preying on and victimizing men? Or are they modern-day heroes for finessing the patriarchal, capitalist framework they’re living in?
Often, the process of unpacking gendered implications in film is like looking for a diamond in the rough. And as seen with with Gentlemen Prefer Blondes, sometimes, it takes a little extra sifting.”