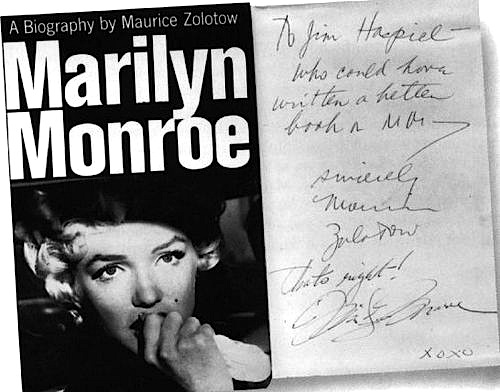 An original review of Maurice Zolotow’s 1961 biography of Marilyn – the first detailed study of her life – is republished today in The Guardian, with critic Richard West proving that highbrow condescension is nothing new. (The above dedication was penned by  Zolotow for teenage superfan James Haspiel, with Marilyn adding her two cents below.)

“The British intelligentsia are suckers for the Cinderella myth. Show them a pin-up girl turned movie star and they will rush to recognise her as a ‘natural actress,’ ‘a born comedienne,’ or ‘artlessly touching.’ One can think of at least three beautiful women, with no acting capabilities whatsoever, who have been acclaimed as actresses by the serious British critics. The same critics had very probably jeered at these same girls when they were merely ‘sex symbols.'”