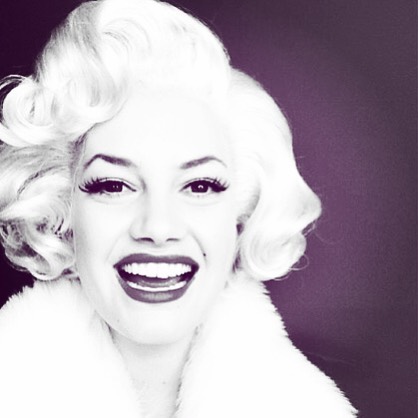 In an interview for Cosmopolitan, TV presenter Danica Kennedy looks back on her stint as a Marilyn lookalike at Universal Studios.

“For wardrobe, all of the Marilyn impersonators always wore that classic white dress from The Seven Year Itch. That includes pantyhose, Spanx shorts for when the fan blew up our skirts, and this corset bustier that was totally crazy … I would step on a platform and a fan would blow my skirt up. Then I’d have to say, ‘Oops!’

When you play somebody for two years, sometimes their characteristics can blur into your personal life accidentally. If I’m out and drinking champagne, which was Marilyn’s favorite, I’ll accidentally slip into using my sexy baby voice. It’s so awkward, especially since I’m not trying to be Marilyn.

I don’t think playing Marilyn has affected my psyche, but that’s probably because I never took playing the character too seriously. But when people want to debate with me about how she died or what she was like, I find myself standing up for her … We have all been through tough times, and her story is so tragic yet relatable.”