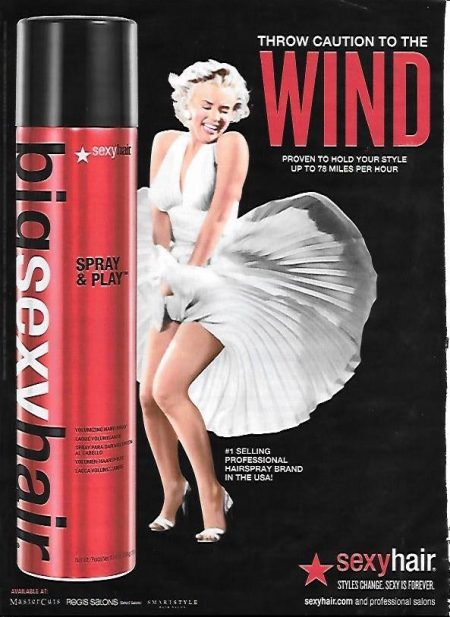 That iconic scene from The Seven Year Itch – and the dress worn by Marilyn as she stood over the subway grate – is constantly being referenced in popular culture. One recent example is this magazine ad for the Marilyn-themed Sexy Hair brand.

On Immortal Marilyn this week, Marijane Gray unravels the mystery of what happened to that dress, designed by Marilyn’s regular costumer, Travilla.

“The white pleated halter dress that Marilyn Monroe wore in The Seven Year Itch is always described in superlatives: most iconic, most recognized, most recreated, most expensive. It can also be called the most mysterious: how many copies of the dress were there? Is there another one in existence, hidden away all these years? Did Marilyn herself own a copy of the dress, and if so, where did it end up? And perhaps most intriguing: was a copy of the dress really stolen back in 1993?”

Also this week, Keena Al-Wahaidi reviews the movie that started it all for The Medium, the student magazine for the University of Toronto. (Incidentally, the campus is based at Mississauga, which is also home to a skyscraper complex whose curvaceous design has earned the nickname The Marilyn Monroe Towers.)

“The most notable aspect of The Girl is her obliviousness towards her own allure …. The most dubious fixture of this film is the lack of identity in Monroe’s character. The reason for her ambiguity is because she’s nameless … However, Monroe’s lack of identity contributes to the mystery of the film’s plot. Regardless of the immorality of the situation, we find ourselves rooting for Richard and The Girl. Despite the futility of their relationship, or perhaps owing to it, their fling is undeniably enthralling.”